(Clearwisdom.net ) On July 19th and the 21st 2010, Falun Gong practitioners in Italy held demonstrations in front of the Chinese Consulate in Milan, calling for an end to the Chinese Communist Party's (CCP) eleven years of brutal persecution of Falun Gong.

On these two days, practitioners from Milan, Italy and surrounding cities demonstrated the exercises and sitting mediation in front of the Chinese Consulate. Immediately opposite the Consulate's gate, practitioners hung up banners that read, "7.20: eleventh anniversary of Falun Gong's efforts against persecution", "CCP is the chief criminal in persecuting Falun Gong," "Heaven will eliminate the CCP, Quit the Party to save yourself," etc. They quietly commemorated fellow practitioners in mainland China who have died as a result of the persecution for upholding their beliefs, and called for dissolving the CCP and stopping the persecution. 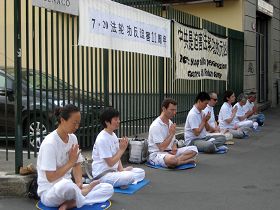 Practitioners in Italy meditate in front of the Chinese Consulate 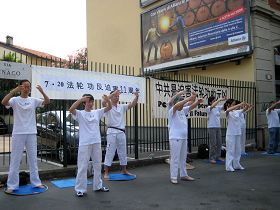 Passer-bys were moved by the peaceful atmosphere of the exercise demonstration. Some stopped to carefully read the truth-clarifying exhibits displayed on the side. Some accepted leaflets and talked with practitioners. Some passing cars slowed to a stop. Passengers rolled down the windows to ask for leaflets.

Two Chinese girls were shocked to see the torture photos in the exhibits. They said that they did not know the CCP had done so much evil. When told that more than 77 million people have quit the CCP and its affiliated organizations, they also wanted to withdraw from the Young Pioneers and the Communist Youth League that they had joined previously.

An Italian lad who took a leaflet watched the exercise demonstration for a while and returned to ask where one could learn the practice.

One practitioner spoke up to a group of Chinese who came out of the Chinese Consulate, "The CCP's brutal persecution of Falun Gong practitioners has persisted for eleven years. It is a universal law that good is rewarded and evil is punished. The Heavens are about to eliminate the CCP. Hurry up and quit the CCP to guarantee your safety." Upon hearing this, they accepted the truth-clarifying leaflets one after another with understanding smiles on their faces. Some in the group asked, "Is that true? I will read it carefully later." 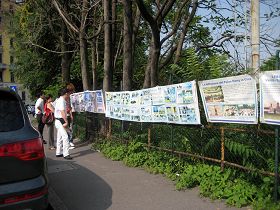 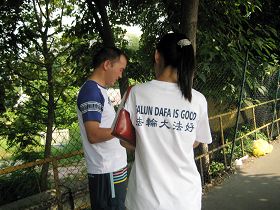 A passerby takes a truth-clarifying flyer from a practitioner

On July 20, 1999, Falun Gong practitioners around the world, including those in Italy, began their persistent efforts to end the persecution. In the past eight years, Falun Gong practitioners in Italy braved the weather to clarify the truth in front of the Chinese Consulate in Milan, calling for people of conscience to stop the CCP's persecution of righteous beliefs.