June 05, 2010 |   By a Clearwisdom correspondent from Hunan Province

(Clearwisdom.net) After Falun Gong practitioner Mr. Lei Yangfan was illegally arrested on May 8, 2010, he started a protest hunger strike in the Changsha City Laoheyue Brainwashing Center (known to the public as Changsha Legal Education Training Center).

During his hunger strike, the 610 Office in Changsha City and the Furong District, and officers from Wenyi Road Police Station tried to force Mr. Lei to undergo infusions, but he refused to cooperate with them. They later force-fed him, but Mr. Lei threw up all the food, so they finally had to stop. Mr. Lei's family wasn't allowed to visit him at first, but in order to persuade him to give up the hunger strike, they allowed Mr. Lei's father to visit him. The authorities refused however, to let his mother see him even after she went to the brainwashing center on four occasions.

Mr. Lei's family has asked Furong District 610 Office to release him, but there has been no official reply. Office personnel only mentioned that they would report their request to the higher-level officials. Mr. Lei's family members are very worried about his health and safety. 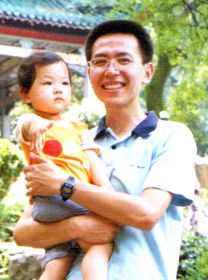 Mr. Lei Yangfan, 36, was a loan officer with the Bank of China, Hunan Branch. After he began practicing Falun Gong, he refused bribes and acted according to Truthfulness-Compassion-Forbearance. After the Chinese Communist regime started the persecution in 1999, he was forced to quit his job and was sentenced to forced labor. Because his wife left him, he had to raise his young daughter, Hanhan, on his own. On April 18, 2010, he was severely beaten by police officers. On May 8, he was beaten again and arrested.

When Mr. Lei was browsing the Internet at an Internet cafe on May 8, he was taken into custody by several police officers. A witness reported, "Four police officers stomped on him, forcing him down to the ground." Some people heard Mr. Lei say to the police officers, "I am a Falun Gong practitioner, I didn't do anything wrong." Then they beat him until his head and face were bleeding. That night, Mr. Lei was transferred to the brainwashing center where he remains.