Recalling Falun Dafa in Macheng City Before the Persecution (Photos)

June 26, 2010 |   By a Clearwisdom correspondent in Macheng, Hubei Province, China

(Clearwisdom.net) In 1993 a man from Macheng City, Hubei Province, China was on the verge of going blind. He and a friend went to Wuhan City, where they had the opportunity to learn Falun Dafa. The two friends then introduced the practice to people in Macheng City. Through promoting the practice to surrounding towns and villages, the number of practitioners increased quickly to several thousand and Dafa practice sites were established all over Macheng City. 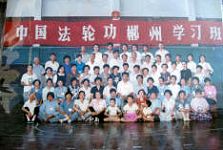 Falun Dafa teaches its practitioners to be kind and compassionate to others and doesn't ask for money. Its ability to improve health is widely known. At large practice sites there were often 200 to 300 people, and smaller sites would range from 40 to over 100 people.

Every morning a coordinator would hang up two flags. One had "Falun Dafa" in red letters on a yellow background, and the other described the special features of Dafa in blue letters on a white background along with the Dafa emblem. Group practice, held in a public park, started at 4:30 a.m. and lasted for two hours. Two coordinators were there helping whoever was interested in learning the exercises. Many people stood on the side watching the practitioners.

Places where practitioners gathered for group study of the Dafa principles included classrooms, meeting rooms, and practitioners' homes. Generally, a picture of Teacher would be hung on the wall, which promoted an atmosphere of peace and harmony.

Every evening from 7:00 to 9:00, practitioners brought the book Zhuan Falun with them to study Dafa. We sat on the floor and took turns reading one paragraph at a time. In some cases people preferred to read one page at a time. After reading, we shared our understanding of the principles, and discussed issues about how to improve our xinxing. The book teaches each practitioner to follow Truthfulness-Compassion-Forbearance to become a better person, look inward to find areas for improvement, and find and eliminate one's attachments. We also emphasized caring for others and providing a clean environment for others. For this reason many agencies were willing to let us use their space and sometimes even their facilities.

In such a righteous environment the practitioners improved fairly quickly. One of the practitioners, who found it difficult to sit in the full lotus position, had the feeling that his knees failed to hold when he tried to sit that way. However, after completing the fifth exercise, his knees felt normal again. After experiencing pain for some time, one day he noticed that he no longer felt any pain when sitting in the lotus position.

There was a lady in her seventies who was illiterate. She walked over to join a study group and tried to follow along with the practitioners as they read Zhuan Falun. She was anxious about being able to learn to read, and one night fell asleep over the book. When she woke up the next day, she was able to read some of the words. She then bought candies for the children who could read to her, and in this way learned to read one line at a time. She was eventually able to read the entire book. Today she is in her eighties and she can read Minghui Weekly magazine. This type of miracle is not unusual. There is another elderly practitioner, who had only two years of grade school education, who is able to recite Zhuan Falun from memory.

Between January 15, 1995 and July 1999, the practitioners in Macheng City held experience sharing conferences at the same time every year. On January 1, they demonstrated the five exercises on the street. 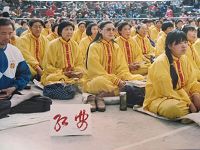 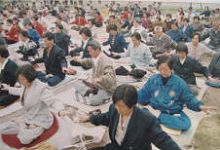 In order to bring benefits to the public from 1966 to July 1999, the practitioners in Macheng City used their vacation time to go to surrounding villages and towns to spread Dafa and teach people the exercises. They did this almost every week beginning in 1997. 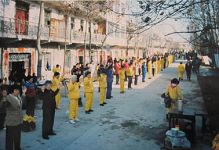 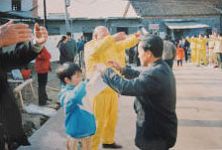 Usually, about 100 to 300 practitioners from Macheng City went to surrounding areas to spread Dafa regardless of weather conditions.