(Clearwisdom.net) The annual three-day Hiroshima Flower Festival opened on May 3, 2010, a warm and sunny spring day. The Japan Falun Dafa Association participated by invitation. It was the ninth year Falun Dafa has participated in this grand cultural event. 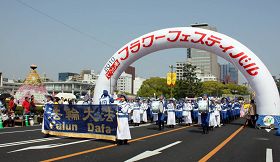 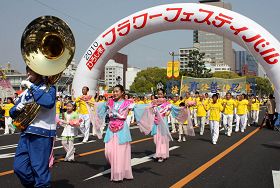 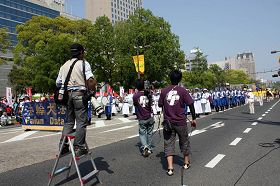 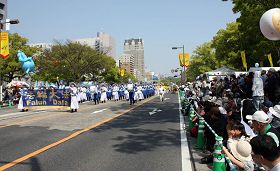 Parade spectators focus their attention on the Falun Gong procession

The theme of the 34th Hiroshima Flower Festival was "In hands joined in friendship, flowers of peace will bloom." This festival is one of the three major celebrations in Japan in May. About one and an half million people participated, including groups from Hawaii, Korea, Brazil, and other countries. Crowds of people started gathering in Hiroshima Peace Memorial Park in the morning.

Falun Dafa practitioners entered the park following the guide at 2:20 p.m.. Spectators were immediately drawn to the Falun Dafa procession. Using a speaker system, the festival organizing committee introduced the Falun Dafa contingent, saying, "Falun Dafa is also called Falun Gong. It is a traditional Chinese cultivation practice. Falun Gong follows the principle of Truthfulness-Compassion-Forbearance and is widely revered as a mind-body-spirit improvement cultivation. People in more than 100 countries around the world practice Falun Gong. They actively participate in community activities and are devoted to peace and friendship around the world..." Parade spectators clapped and smiled at the Falun Dafa procession.

The Falun Dafa procession was composed of the Divine Land Band, Celestial Maidens Dance Team, and an exercise demonstration. In blue and white traditional costumes, the band played powerful music. Celestial maidens, dressed in pink, demonstrated the beauty of Falun Dafa through their graceful dance. Practitioners in yellow T-shirts, including the elderly and children, demonstrated the Falun Gong exercises to beautiful music. Two lion dancers playfully followed the procession, attracting the attention of many children.

Many took pictures of the Falun Dafa procession. Others clapped to the beat of the band's music. Some children copied the Celestial maidens dance movements. They were grateful to accept elegant handmade lotuses and bookmarks on which were printed, "Falun Dafa is great" and "Truthfulness-Compassion-Forbearance is great!"