(Clearwisdom.net) There is a little city called Mudanjiang near the northern border of China. On May 13, 1999, Master's birthday, Falun Dafa practitioners came as usual, shared their experiences, and cherished the opportunity for cultivation. When the music began, they lined up neatly in rows and started to do the exercises.

They appeared happy and serene, from seven or eight-year-old to sixty or seventy-year-old fellow practitioners, they moved in unison. They came to celebrate Master's birthday with morning group exercises: "Greetings Master! Happy Birthday Master!"

Falun Dafa banners to introduce the practice were hung around the exercise site.

With the spread of Falun Dafa in 1992, because of the miraculous health effects and elevation of moral values, it was welcomed everywhere. There were over 100 million people practicing Falun Dafa before July 1999, and Falun Dafa exercise sites were all over Mudanjiang city: in Culture Palace, People's Park, Beishan Park, Jiangbin Park, and Children's Park... You could see Falun Gong practitioners everywhere.

True cultivators all abide by the principle of Truthfulness, Compassion, Forbearance, and adjust their thoughts and deeds according to the Fa. Because they practiced Falun Dafa, numerous people in Mudanjiang stopped fighting, smoking, and drinking, and became wholeheartedly devoted to their work, making the social climate better, improving their health, and saving a lot of money in health costs for the nation and their families. Because of practicing Dafa, numerous families became harmonious, neighbors became closer, and the environment was purified. This was observed by everyone. During the brutal persecution, a Falun Dafa practitioner returned a huge amount of found money and refused the reward. The owner of the lost property was so moved that he went to the TV Station to report it, but the authorities stopped the broadcast of the story because the person who did the good deed was a Falun Gong practitioner. 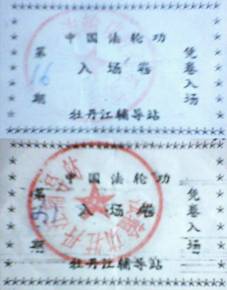 In the nine-day video seminar, one lecture was shown each day and a volunteer instructor taught the exercises. After the ninth lecture, the instructor and students would share the changes they experienced during those nine days. The greatest impression was that their outlook on life had changed. People now knew how to be good, and their entire person had changed! Later they could join one of the many exercise sites nearby for group exercises.

One practitioner had been a smoker and a drinker for a long time. After learning Falun Gong, he understood the need to get rid of all his attachments. His addiction to smoking was an attachment, and besides, smoking did nothing good for him. He decided to get rid of the attachment, and abide by the principles of Dafa. The miracle began! He forgot all about smoking, and couldn't even stand the smell of cigarettes. It really made him sick. Instead of feeling withdrawal symptoms, he felt great, light, and full of energy!

There have been numerous miraculous stories that took place in our area. There is a village called Daqingbei in Tielinghe Town, near Mudanjiang City. There was no bus service and the roads were not good. There was a couple in the village. The husband was addicted to alcohol and cigarettes and he had all sorts of illnesses. They fought all the time. He wanted to quit smoking and drinking, but could not. His wife's health was also poor.

After they obtained Dafa and read Zhuan Falun once, the husband suddenly realized that as a practitioner, he should meet the standard and do things according to Master's requirement: he should not smoke or drink. With this simple thought, he was able to quit both smoking and drinking. He became healthy and strong and his face glowed, as if he had been reborn. His wife also became healthy, all her illnesses disappeared, they no longer fought, and the family became harmonious. Through seeing their change, numerous people with predestined relationships with Dafa also came to learn.

In another small village near Daqingbei, a family of three also obtained the Fa. One day the husband went to the mountain with his bull-drawn carriage. Suddenly his carriage turned over with him underneath. He was scared to death and could not move at all. Then he realized: I am a Falun Dafa practitioner, I should ask Master for help in times of emergency, only Master can help me! With this thought, he could suddenly move again. He crawled slowly out of the cart and was not hurt at all. Only his clothes were torn. He tried to turned the carriage upright, but it was impossibly heavy. He thought: I will ask Master one more time. He did not use much strength and the carriage turned back over. Usually, when carriages turn over like that, if the driver is not dead, there would at least be serious injury, but he did not have a scratch. He was so excited, when he came home he told everyone in the village that Dafa Master had saved him and his family (as he provides the income for the household.) Many people witnessed the wonder of Falun Dafa and also came to practice.

One day, Falun Dafa practitioner A's wife and child who was an elementary school pupil went shopping on a bike. A fast moving car hit the bike and the child was thrown several meters. The bike was completely destroyed, but the child suffered only a small chip on his tooth. He was fine, and they did not exploit the driver for compensation as many people do.

Falun Dafa practitioner B's granddaughter was a seventh grade student. One day at school, she was knocked down by a tall senior boy and she passed out. After she was taken to the hospital, she was diagnosed with a concussion. The right side of her head was dripping blood, and she felt nauseated. Practitioner B and the family started reciting "Falun Dafa is good" and the child went to sleep. She recovered completely by the next day.

Falun Dafa practitioner C's daughter went to college in Harbin. One day she was hit by a taxi, and her foot was pinned down by the wheel. After the driver realized it, he turned the wheel, and she only suffered minor skin abrasion, though there were tire marks on her pants! She told the taxi driver that she was alright and he could go. She was truly alright! Such fortune was brought by Dafa. They all realized that even the family members of Dafa practitioners are under Master's protection. Thank you Master!