(Clearwisdom.net) Nearly a hundred Falun Gong practitioners held a rally on Saturday, May 8, 2010, prior to World Falun Dafa Day at Town Hall Square in downtown Sydney. They also marched through the main streets to celebrate the 18th anniversary of Falun Dafa's public introduction. They wanted to thank Master Li for his infinite grace and vast mercy. 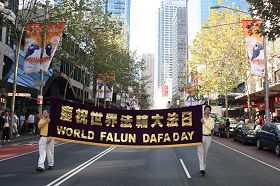 The parade set off at 2:00 p.m. from Town Hall Square. The procession passed through busy business streets, marched to Chinatown, and finally reached the Sydney Entertainment Center. Amazed passersby on the parade route took pictures.

The Divine Land Marching Band led the procession. They performed "Falun Dafa Is Good," "Fa Rectifies the Universe," and other selections. Following the band was a lineup that featured the Nine Commentaries on the Communist Party, urging people to withdraw from the Chinese Communist Party (CCP) and its affiliated organizations. Behind it came a display exposing the CCP's persecution of Falun Gong. On a large, slowly moving truck was a reenactment of organ harvesting from living Falun Gong practitioners. The waist drum team was the last group in the procession.

Among the spectators was a couple from Iraq, who told the reporter that they were impressed by the peacefulness and beauty of Falun Dafa and that they understood why the CCP persecutes the practitioners, because there was such persecution in their country. They hoped that Falun Gong practitioners could help more people learn the facts about Falun Gong and stop the persecution as soon as possible.

One spectator had a photo taken in front of a banner reading "Celebrating World Falun Dafa Day." He told the reporter that he wanted to post the photo to his friends, so that they could also see the beauty of Falun Dafa.

After the parade was over, all the practitioners had a photo taken as they shouted in unison, "We wish revered Master a Happy Birthday!"