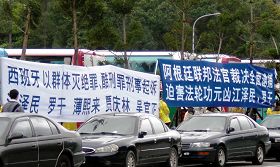 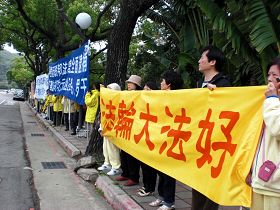 According reports published on the Minghui website (Chinese version of Clearwisdom.net), hundreds of Falun Gong practitioners have been imprisoned and tortured in the First and Third Forced Labor Camps of Shanghai since the persecution was launched in 1999, including Taiwanese Falun Gong practitioners. Mr. Lin Xiaokai was deceived into going to Shanghai and was imprisoned there. Ms. Li Yaohua and her daughter Ms. Zhang Yibo were sentenced to three and one-half years with eighteen months in prison just for distributing brochures. Li's father and son are citizens of the People's Republic of China. They held two press conferences calling for the release of Li and her daughter.

Ms. Fu Chengyao said she married a Taiwanese in 1992 and became a permanent resident of Taiwan in 1998. It is legal to practice Falun Gong in Taiwan, and the police protect this right. But things are different in the China. American permanent resident Mei Xuan's husband was secretively arrested after he obtained his boarding pass for a flight to the U.S., just because he practiced Falun Gong. Ms. Fu hoped that Han Zheng would hear Falun Gong practitioners' voices during his visit to Taiwan.

During the media interview of Mayor Han Zheng, a reporter asked Han if he had seen the big group of Falun Gong practitioners holding banners at the crossing. Han immediately ended the interview, stepped back, turned around and left. He didn't respond to the question.

When Han left the National Palace Museum, Falun Gong practitioners were still holding up the banner at the crossing and peacefully calling for an end to the persecution.