(Clearwisdom.net) On April 2, 2010, the Vinnitsa State official website in northern Ukraine reported the news that the "Truthfulness-Compassion-Forbearance" International Art Exhibition had come to Vinnits. In Ukraine, the Art Exhibition has been held at Kiev, Odessa, and other cities, and has now come to the state of Vinnitsa. The art exhibition will be held for a period of 14 days at the modern art center, "Duarte-Ashok," on April 1-14. 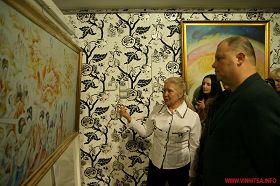 The article pointed out, "The paintings are well-made creations by eighteen artists from the United States, Canada, China, and Taiwan. The exhibition has been touring the world since 2005. The art exhibition is now being shown concurrently in Australia, Turkey, Indonesia and Israel. The artists are all Falun Dafa practitioners, and their practice is based on the principles of "Truthfulness-Compassion-Forbearance." The artists are relaying their understandings about the principles through these paintings. Some have been illegally detained in the (CCP) prisons."

The article quoted what the guide of the art exhibition said, "Every painting expresses the relationship between good and evil, and expresses the artist's belief in Truthfulness-Compassion-Forbearance. So these paintings all have their own energy. While the art exhibitions were being held in some countries, the Chinese Embassies put pressure on organizers because they feared having the facts of the persecution exposed. After viewing the exhibition, those who wish to write comments about the show can write it in the message books. The guide of the art exhibition told about her own experience, where a woman once approached her, saying, "I have understood the need to continue to live after seeing this exhibition."

Vladimir, the honorary artist of Ukraine, and chairman of the Vinnitsa State Cultural Affairs Committee said, "We think that China is a developing country, but these paintings are demonstrating another side. These people want to improve their morality, but (the CCP) wants to eliminate them. This really is not an good situation. The ongoing persecution is a great catastrophe. These paintings show us that there is an another world that we don't know. This is what the Truthfulness-Compassion-Forbearance International Art Exhibition has revealed to us. "