(Clearwisdom.net) On April 25, Falun Gong practitioners from Philadelphia held a rally in front of the Liberty Bell, commemorating the peaceful appeal 11 years ago. 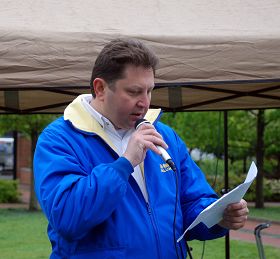 Many practitioners that participated in the April 25 Appeal 11 years ago shared their experiences and explained why they did it. They said that it was a peaceful, rational appeal, and that their purpose was to clarify the truth about Falun Gong to the government. 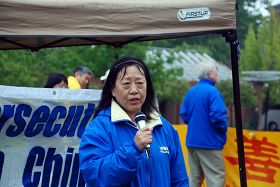 Ms. Yang Jingfang said, "It was my belief in Falun Gong that helped me survive the persecution in China." Ms. Yang was jailed for four years in China for practicing Falun Gong.

Several practitioners spoke at the rally. They talked about how they were tortured in China because of their beliefs. They pointed out that many practitioners are still jailed in China. They asked for help to stop the persecution. 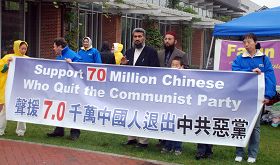 Mr. Hussaine and friend help hold up a banner with Falun Gong practitioners.

Many Chinese tourists accepted the informational materials. Mr. Wan said that he already knew about Falun Gong. He comes from Master Li Hongzhi's hometown, and one of his friends, who practices Falun Gong, was arrested. He himself was also jailed for one day because he helped his friend to hand out flyers. He was glad to see the Falun Gong practitioners.

On April 25, 1999, over 10,000 Falun Gong practitioners in China gathered outside the State Council Appeal Office to demand their basic right of belief and the immediate release of 45 fellow practitioners who had been unlawfully arrested. Though as a result of the appeal, the Chinese Communist regime promised to protect the practitioners' rights and released the arrested practitioners, three months later, the regime started a nationwide persecution to "eliminate Falun Gong." The brutal persecution has continued for nearly 11 years.