(Clearwisdom.net) The Second Putrajaya International Hot Air Balloon Fiesta was held from March 18-21, 2010, at Kuala Lumpur, Malaysia. Falun Dafa practitioners participated in the event. They set up a booth to do the Falun Gong exercises and distributed Falun Gong informational materials during the four-day festival. Visitors to the booth learned that Falun Dafa has spread to over 100 countries and regions, resulting in the physical and mental wellbeing for people in those countries. Many were interested in learning Falun Dafa. 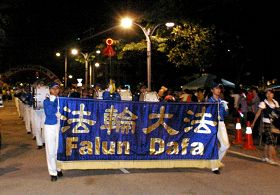 The Divine Land Marching Band played at the International Hot Air Balloon Fiesta in Malaysia on the evening of March 20, 2010 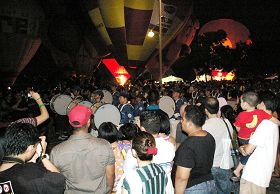 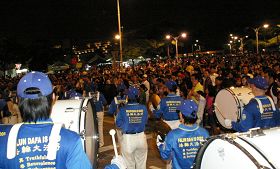 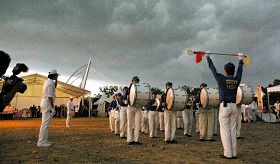 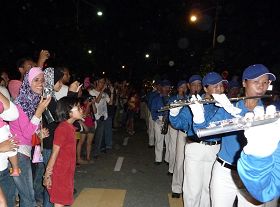 There were 23 multi-colored hot air balloons representing 11 different countries, including France, the Netherlands, the U.S. Belgium, Japan, Poland, Germany, Switzerland, New Zealand, Thailand, and Malaysia. The organizers estimated that the event would attract more than 150,000 people. To add to the joyous atmosphere, the organizers prepared many fun activities, including children's games, a remote control aircraft flying display, a market, and booths. The Divine Land Marching Band was invited to perform on the evening of March 20 and at the closing ceremony.

The band played "Falun Dafa Is Good," "Fa Rectifies the Universe," "Fa Drums and Fa Trumpets Shake the World in Ten Directions," "Deliver Presents," "Ode to Joy," and "Joy to the World." The spectators were amazed, and many took photos of the band.