(Clearwisdom.net) Ms. Shen Yueping worked at the Maternity and Child Care Center in Yunsi, Yunnan Province in July 2009. While at the Yunnan Second Women's Prison, her captors subjected her to excruciating torture that led to a perforated lung. She was then sent to the Kunming Third Hospital for treatment and died there. 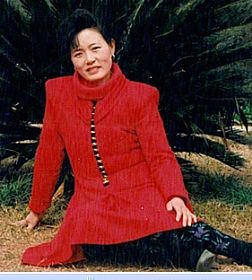 Prior to the 2010 Chinese New Year, I met a practitioner who practiced cultivation with Ms. Shen and recalled some of her good deeds. Below is her account.

By the time I had cultivated for about six months in 1998, Ms. Shen then had already been a practitioner for almost two years. She and her husband rented a room and voluntarily organized more than ten practitioners to study the Fa together. What they did was of great benefit to every new practitioner. Ms. Shen treated people kindly and was very patient in teaching others the exercises. All the practitioners liked her. She lived a very simple life. She bought lots of tapes with saved money, recorded the exercise music on the tapes, and sent them to practitioners who had a hard time financially. She contributed silently to others and never showed off.

I admired her wisdom and pure heart that were a result of Dafa cultivation. She often said, "We practitioners should be nice and cultivate our character according to Truthfulness-Compassion-Forbearance; we should become better people, not merely good people."

She also told those practitioners who paid too much attention to their children how to deal with them and their studies and education. She often smiled and said, "The adults improve as they educate their children. We should not seek fame or make unrealistic comparisons. We can only educate our children well with compassion, since it really touches the soul. Your children will imitate you when they hear your kind words and see your compassionate behavior. Then parents, of course, won't need to expend so much effort to correct their children."

Ms. Shen and her husband, Pu Zhiming, planned to go to Beijing in October 2000 to appeal for Falun Gong. Before leaving, they talked with their only son, Pu Dan, and told him of all the things that might happen and that they probably would not be able to return. Their son, also a practitioner, insisted on going to Beijing with them. His Dafa cultivation enabled him to do well in his studies and he became physically fit. He, too, wanted to go to Beijing and appeal for Falun Gong. The entire family, along with several other practitioners, went to Beijing separately by car.

After arriving in Beijing, they knew that people were being arrested at the Appeals Department. Even when someone spoke the truth about a topic, he or she would be arrested. So they went to Tiananmen Square to show their banners. Just as the family had taken out a banner with "Falun Dafa Is Good" written on it and shouted the words twice, plainclothes policemen knocked them to the ground and beat them. They had scratches everywhere. Then they were dragged into a police vehicle and imprisoned at a detention center in Beijing. They were interrogated and tortured to "confess." At that time there was no more room to detain practitioners in Beijing because so many had already been arrested, so the family was sent home. People from the Yuxi City government arrived in Beijing and took the practitioners from Yuxi back. All of them were then incarcerated at the Dabanqiao Forced Labor Camp in Kunming and give three-year sentences.

It was not until 2003 that the family reunited, and Ms. Shen then went back to work.

Ms. Shen worked hard and sought no recognition or benefits. Her colleagues gradually understood her and learned something about Falun Gong. She always sincerely cared for and helped patients. A mother who makes a living by picking up trash took her fevered son to the hospital. She had no money to pay for an injection, so Ms. Shen silently paid the 50 yuan for them.

The communist regime continued to persecute and grossly abuse this kind person until she lost her life, merely because she persisted in her belief and wanted more people to understand the truth.

For more details on Ms. Shen Yueping's suffering and death as a result of gross abuse at the Yunnan Second Women's Prison, please refer to: "Ms. Shen Yueping Dies as a Result of Abuse in Prison" http://www.clearwisdom.net/emh/articles/2009/7/27/109535.html