March 13, 2010 |   By our correspondent in Heilongjiang Province, China

(Clearwisdom.net) Falun Gong practitioners Mr. Xu Linshan and Mr. Liang Jinyu from Nianzishan District, Qiqihar City died in February 2008 and February 2010, respectively. Both of their deaths were the direct results of torture they suffered in Tailai Prison.

On March 2, 2000, Mr. Xu Linshan was arrested by officers from the Yuejin Police Station in Nianzishan District while he was sharing cultivation experiences at a fellow practitioner's home. After being detained for 15 days, he was taken to Longjiang Prison. After he was released, he was arrested again by police from the Yuejin Police Station while doing the Falun Gong exercises with others in a park in late March. He was detained for a month that time. It was still frigid in Qiqihar, and the police tortured him by pouring cold water onto his body. The Chinese Communist Party (CCP) also formed a special group to persecute Falun Gong practitioners in the Nianzishan District. The head of the group, Liu, led his people to beat practitioners brutally. Mr. Xu was tortured for a month and then released.

On July 5, 2000, Mr. Xu was arrested by the police from the Yuejin Police Station again. After being detained for a month, he was taken to Fuyu County Forced Labor Camp in Qiqihar City. He was released on February 14, 2001.

On April 25, 2002, Mr. Xu Linshan was arrested by officers from the Yuejin Police Station again. Under orders from Deputy Director Shi Shaoshuan, the police broke a stool and used the broken pieces to stab at Mr. Xu's chest. Mr. Xu's chest was covered with blood and his undershirt was soaked in blood.

Later, Mr. Xu Linshan was illegally sentenced to five years in Tailai Prison. At the Tailai Prison, guards tortured Mr. Xu by stabbing him with needles, force-feeding with highly saturated salt water, restricting his freedom, and using various torture instruments on him. In spring 2004, police beat him so badly that they fractured his thighbone. Mr. Xu was immobilized and could not get out of bed. He started to have symptoms of swelling, cirrhosis of the liver, ascites, renal failure, and purulent meningitis. He became extremely skinny and his face turned yellow. He spent his time either unconscious or completely in a daze, and was near death. They took him for acupuncture treatment, but it did not help. Even though he was in such poor physical condition, the prison repeatedly rejected his family's requests to have him released for medical treatment.

It wasn't until December 31, 2005, that Tailai Prison let Mr. Xu go out for medical care. By then, Mr. Xu was comatose and paralyzed. He had no bladder or bowel control and could not take care of himself. An examination found that his right thigh bone was broken and disfigured. 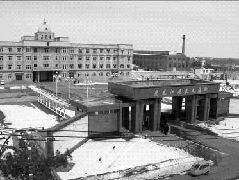 Nianzishan District Government Location (where the 610 Office is located)

In 2000, Mr. Liang Jinyu was arrested while sharing cultivation experiences at a fellow practitioner's home and illegally detained for 15 days. In April 2002, he was arrested along with 29 other practitioners by police from the Yuejin Police Station for sharing Falun Gong articles with other practitioners. That evening, police from the Yuejin Police Station beat Mr. Liang so brutally that his face was disfigured, his skull was fractured, and his body was covered in blood. After that, he could only lay on a bed and was unable to take care of himself. He was left in a pool of his own blood in his bed. After being illegally detained for six months in Nianzishan Detention Center, Mr. Liang was sentenced to ten years in Tailai Prison.

Mr. Liang was closely monitored and severely tortured at Tailai Prison. One particularly cruel police officer used a needle to stab his genitals, leaving needle holes everywhere on his genitals. In 2003, Mr. Liang was beaten so badly that he had bleeding in his brain and was confined in a hospital for two months.

In 2005, Mr. Liang had a stroke and was in critical condition. Prison officials forced his family to pay 6,000 yuan before they released him. Previously, Mr. Liang Jinyu had been very healthy, both physically and mentally, because of practicing Falun Gong. However, because of the persecution, his health deteriorated to the point where he suffered memory loss and was unable to speak. He had no bladder or bowel control, was confined to a wheelchair and could not take care of himself.