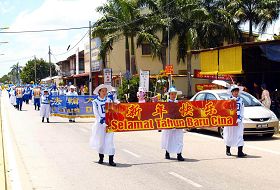 Event organizer Mr. Chen said the parade received great support from local police, Village Head and celebrities. After seeing such a grand parade, the Village Head told Mr. Chen the next time they [Falun Gong practitioners] planned to hold a parade, they could notify him early so that he could open the stadium for them and arrange for media reports.

A local volunteer organization, RELA, took the initiative to help. Mr. Chen was very appreciative of their assistance. After watching the parade, a local celebrity invited Falun Gong practitioners to hold the parade one more time following a different route. Falun Gong practitioners made arrangement right away. Their first route covered main streets. The second route started from Stadium and passed through the whole town.

This was the first time for local residents to see such a parade. They were happy the parade brought a holiday atmosphere and Chinese culture to their town. Mrs. Huang and her husband Mr. Jiang stopped their car and watched the parade happily. It was the first time she had seen such a large-scale street activity there. They enjoyed everything, including the costumes and music. The traditional Chinese culture brought by the parade was refreshing to local residents.