(Clearwisdom.net) On December 5, the Divine Land Marching Band, consisting of Falun Gong practitioners from South Korea, performed in front of the gate of Ewha Women's University. 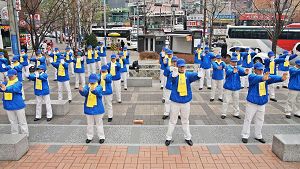 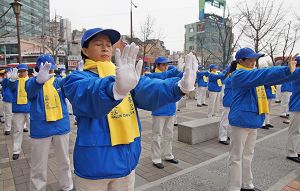 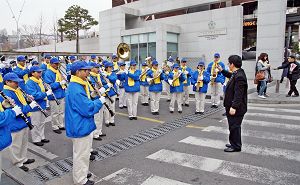 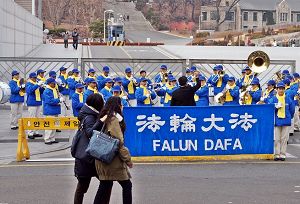 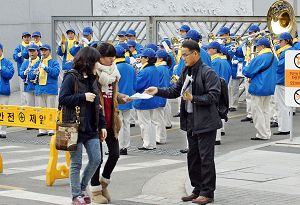 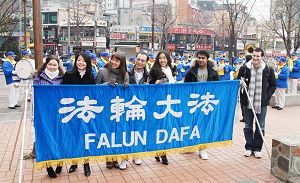 Ewha Women's University is a well-known university. There are many stores around the campus, so it is also a popular tourist spot. Every day, more than 30 tour buses with several hundred Chinese tourists go there.

The Divine Land Marching Band demonstrated the exercises in a park next to the campus. Then, they played several songs, including "Falun Dafa Is Good" and a Christmas song, which attracted many tourists. The Chinese people saw something that cannot be seen in China, where Falun Dafa is persecuted. The Western tourists took photos with the Falun Dafa banner.

Later, the band moved to the front gate of the campus and performed for one and a half hours. Practitioners also passed out truth-clarifying materials to tourists, faculty and students.

Many Chinese people, including the officials of the Chinese embassy who live near the campus, saw the performance. Many of them took photos or videos of the performance.

One practitioner went to a Chinese tour group and told them that they needed to learn the truth for their own future. A Chinese gentleman said: "We know the truth. We are not afraid." His friends agreed.