(Clearwisdom.net) My father is a laborer, my mother Xia Aihua is a housewife, and I am a university student. We live in Wuchang District, Wuhan City.

On October 15, 2010, my father had not yet returned from his night shift, and at around 9:00 a.m., five people who claimed to be from the community office and local police station banged and kicked at the door and window of our home. They yelled that they would break in if we refused to open the door. After we opened the door, they demanded that my mother come with them. They left a phone number and a contact name before illegally arresting her.

My father came home after 10:00 a.m., and after I told him about what had happened, he went to look for mother at the Pengliuyang Community Office of Wuchang District and Huanghelou Police Station. He was told that she was taken to a brainwashing center to be "transformed."

The name and phone number they had left behind were non-existent. One of the police officers who arrested my mother was Xue Yu. He had told us that he was given orders verbally by higher authorities, telling him to take her to a brainwashing center, because she is a Falun Gong practitioner. 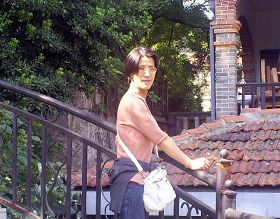 Since childhood, my mother had been weak due to many illnesses. When I was little, my father's workplace was not profitable and my mother was unemployed, so we lived in near poverty.

In 1998, my mother was admitted to the hospital because she was getting sick more frequently. She was diagnosed with lupus erythematosus, a skin disease that damages the immune system. There is no cure and the patient can only survive by taking medication. She was hospitalized for a long time, but her health did not improve. The medical expenses were a huge burden on our family, and it was a very stressful time. She tried Chinese medicine, but that also didn't help.

My uncle, who was living outside of China, told my mother about a qigong called Falun Gong, which was proven to cure illnesses. Apparently there were stories of miraculous recovery, including people with cancer and other serious illnesses who returned to full health. My uncle told my mother that the practice had spread overseas, and he asked her to give it a try.

Mother found a Falun Gong practice site near our home and started practicing regularly. Slowly she felt better and the red spots on her face and body disappeared. After she returned to health, she rarely caught a cold and was even able to perform heavy work. Not only that, she also turned into an optimistic person.

For over ten years, my mother managed our household prudently and was a great help to her husband and children. Although my father is the only breadwinner in our family, we didn't lack for anything and were healthy and harmonious. Also, mother no longer accepted a subsidy for low income families from the community office, or health benefits. Our family was doing well, we were able to support ourselves, and we were able to free up those benefits for those who were in greater need.

My mother taught me to do an honest day's work, be truthful, righteous, forbear, and be tolerant. Because of this, I had many good friends and was well liked at school. I was an outstanding student and was awarded a scholarship. Because of this, my family's financial burden was eased quite a bit.

For all of this, we must give credit to Falun Dafa, as Falun Dafa changed my mother, returned her to health, and gave her a positive attitude, which in turn made our family harmonious and happy. Now, because she is a firm believer in Falun Gong, she is being treated unfairly.

We have not been allowed to see my mother and we are very anxious. We heard that the Wuchang District Yangyuan Brainwashing Center, where my mother is detained, is known for brutally torturing Falun Gong practitioners. We are deeply worried about my mother's safety.

Please help us rescue my mother!