(Clearwisdom.net) The Seventh International Health Fair and the First International Exhibition on Tea, Beverages and Health Related Products were held on November 19-21, 2010 at Putra World Trade Center in Kuala Lumpur, Malaysia. There were 170 booths at the exhibition, and 50,000 people were expected to attend. Falun Gong was the only qigong booth taking part. The beautiful and peaceful exercises attracted many people to the booth. Some people learned to practice the exercises on the spot. 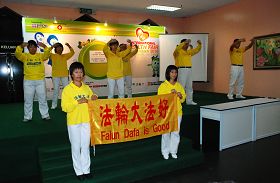 When practitioners introduced spectators to Falun Gong and the persecution, many people showed sympathy for those who have been subjected to the Chinese Communist Party's brutal persecution. Many said it was inconceivable that such violations of human rights and freedom is still happening in China. They encouraged the practitioners to persist in their efforts to put an end to the persecution.

When Komathy, a nurse of Indian ethnicity, passed by the Falun Gong booth, she took a flyer and learned to practice the exercises on the spot. She said to the practitioner, "It's really great, very relaxing. I feel light all over, and I can concentrate better. I feel strong energy while doing the exercises with you."

The practitioners were invited to demonstrate the exercises on the stage for two days, and many people asked for information about local practice sites.