(Clearwisdom.net) The Bayside Health and Outdoor Expo 2010 in Queensland, Australia was held from November 12 to 14 at Cleveland Show-grounds in Redlands. Local Falun Gong practitioners took this chance to introduce Falun Dafa to the public. 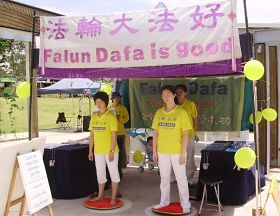 Falun Gong practitioners demonstrated the exercises, which attracted many people, Several of whom were interested in learning the exercises.