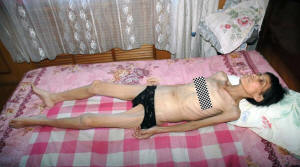 NEW YORK--A 53-year-old woman, whose testimony of excruciating and professionally-administered torture attorney Gao Zhisheng relayed in one of his open letters to China's leaders, died in mid-October as a result of abuse in custody.

According to sources inside China, Ms. Sun Shuxiang (孙淑香), a Falun Gong practitioner from Changchun, died on October 10, four months after her release from a labor camp, where she was shocked with electric batons, injected with unidentified drugs, and forced to perform hard labor. A photo taken immediately upon her return home and smuggled out of China shows her emaciated body.

Sun is the third of Gao's interviewees known to have subsequently been tortured to death. Gao himself has been disappeared since April 2010, with many fearing he may have been killed in custody. This past week, his teenage daughter appealed to U.S. President Barack Obama to seek information about Gao's whereabouts in an upcoming meeting with Hu Jintao ("Please Return My Father," Wall Street Journal)

Ms. Sun had been detained 12 times over the 11 years since the Chinese Communist Party (CCP) launched its campaign to eradicate Falun Gong. As Gao described in his letter, she had been tortured to the verge of death on multiple occasions.

"At the beginning of July 2002... a few plainclothes officers stormed [into my father's home] and arrested me," Gao cited Sun testifying in his December 2005 open letter to Hu Jintao and Wen Jiabao calling for an end to the persecution of Falun Gong practitioners. "They took me to a dark basement. ... [One] officer slapped me and asked which fellow practitioners I knew. I said I did not know any. He then used an electric baton to shock me deep in between my lower ribs."

"Then he asked me if I remembered any phone numbers of fellow practitioners. I refused to say. He then shocked one side of me, from my fingertips to my arm and up to my head and then went to the other side and did the same thing. He went back and forth slowly two times. He changed to another baton with a higher voltage and started to shock the tips of my toes and up my whole body twice. Seeing that I still did not give out information about my fellow practitioners, the officers targeted my eyes with the electric baton. I felt as if my eyes were about to fall out, and I could hardly see. They began to shock my ribs and breasts while continuing to ask me for information. ... I almost died." (full text of Gao Zhisheng's open letter to Hu Jintao and Wen Jiabao)

Sun's most recent abduction occurred in September 2009. She had just dropped her grandson off at school when, upon returning home, three policeman surrounded her, covered her mouth and took her to Changchun Police Department. Three days later she was taken to the No. 3 Detention Center in Changchun and in October 2009 to Heizuizi Re-education through Labor Camp.

According to Ms. Sun's account relayed to acquaintances upon her release, at the camp she was forced to watch television programs slandering Falun Gong every day and was under constant pressure to denounce the practice. At one point, the head of her unit in the camp, Yan Lifeng, shocked her with an electric baton in her face because she refused to complete a so-called "examination paper" featuring anti-Falun Gong questions.

During her time at the camp, Sun was forced to do hard labor, including shoveling snow in minus 30 degree weather. She was also injected with unidentified drugs by medical personnel at the camp. She became increasingly weak, barely able to walk, and suffered from severe abdominal pain after being hit on multiple occasions in the stomach or ribs.

The authorities eventually released her in June 2010 after she had been diagnosed with severe abdominal problems at the China and Japan United Hospital. But this was only after they fabricated a video in which they parsed her statements to create the impression that she had commented positively on her treatment in the labor camps. She never recovered from the injuries incurred in custody and died on October 10, 2010.

"Sun's ordeal epitomizes the cruelty of the persecution against Falun Gong and the authorities' calculated use of various torture methods to break people's will," says Falun Dafa Information Center executive director, Levi Browde. "Be it in a labor camp, detention center, or mountainside torture chamber, Sun and other practitioners like her across China are not given a moment's rest. They are subjected to relentless, exhausting physical and psychological torture."

"Sun's determination in the face of such brutality to not only stand by her beliefs, but to also protect fellow practitioners' around her from a similar fate is awe-inspiring. With her death, the world has lost a truly amazing woman and defender of basic human dignity."