November 11, 2010 |   By a Clearwisdom correspondent in Malaysia

(Clearwisdom.net) On November 7, 2010, the Divine Land Marching Band, composed of Falun Dafa practitioners from Malaysia, went to Kuantan for the first time. Their performances were welcomed by the local residents and tourists. 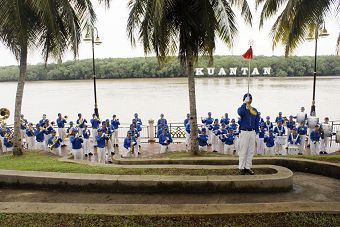 Kuantan is the capital of Pahang and the largest city on the east coast of Malaysia. The band's first stop was Taman Gerola, a large park by the sea. There were many residents exercising in the park in the morning. When the band played, the local residents were attracted to the graceful melodies and slowed down to listen. Some of them took informational materials in order to understand more about Falun Dafa.

Later the band went to the Mini Zoo at Taman Teruntum, a zoo that was built near a mountain and attracted many tourists and locals during the holidays. When the band showed up at the front gate, many people took out their cameras to capture the moment. After they finished playing a popular piece in Malaysia, "Rasa Sayan," the audience applauded warmly.

The band's last stop was Pantai Kuantan, a beach with a long boardwalk to the sea. When the band arrived at the beach, it was already packed with people. The drum beats drew many of them to watch the performance. Practitioners arranged for someone to introduce Falun Dafa and speak about the purpose of the performance.