(Clearwisdom.net) On August 28-29, 2010, during Malaysia's month-long National Day Celebration (from August 15 to September 16, 2010), Falun Gong practitioners' Waist Drum Team and Divine Land Marching Band performed for the local people in Johor, Malaysia. They were well received, and a local Malay media outlet conducted an interview and covered the event in its newspaper. 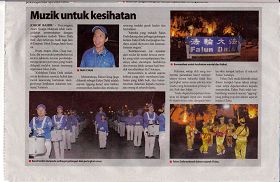 On August 28, the waist drum team first performed at Danga Bay Square, one of the tourist sites in Johor Bahru.

The following day, the Divine Land Marching Band first performed in Setia Indah, and then at Danga Bay Square in the evening. Many local people and tourists watched the performances. A reporter from the local Malay newspaper "Sinar Harian" conducted an interview with Mr. Cai, the conductor of the band, who said that he started practicing Falun Dafa because it was free of charge and easy to access online. On September 4, the newspaper published a positive article on the event, and introduced the Falun Gong exercises, its wide spread around the world and its tremendous benefits. The article title translates as "Music for Health."

Falun Gong, also known as Falun Dafa, is a traditional Chinese spiritual discipline for mind and body. The practice involves slow, gentle movements and meditation. It is easy to learn, enjoyable to practice, and free of charge. Its principles are based on Truthfulness-Compassion-Forbearance. The practice began in China in 1992 and quickly spread by word of mouth throughout China and then beyond. Its beneficial effects in improving an individual's physical health, spiritual well-being and moral character, not to mention its positive influence in the community and society as a whole, have been undeniable. In fact, Falun Gong is practiced by millions of people in 110 countries. The main works of Falun Gong are available in over 30 languages.

On July 20, 1999, the Chinese Communist Party (CCP) launched a brutal persecution of Falun Gong. Since the start of the persecution, Falun Gong practitioners throughout the world have been constantly clarifying the truth about Falun Gong and exposing the CCP's crimes in a tireless effort to end the persecution.