(Clearwisdom.net) On October 17, 2010, the sixth Poland Falun Dafa Experience Sharing Conference was successfully held in Warsaw. Falun Gong practitioners from all over Poland attended the conference. Over a dozen practitioners shared their cultivation experiences. 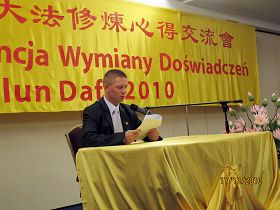 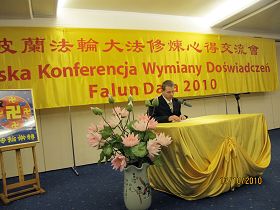 Ms. Huang is over 70 years old. She became rejuvenated after she started practicing Falun Gong. She has persisted in sending forth righteous thoughts, studying the Fa, and doing the exercises every day. In her free time, she makes paper lotus flowers that are given out at Falun Gong activities. She goes to the Chinese Embassy almost every week to peacefully protest the Chinese Communist regime's persecution of Falun Gong. Every week she also delivers the newspaper published by Dafa practitioners to hundreds of Chinese companies in Chinatown and clarifies the facts to them. Ms. Huang is welcomed and respected by most Chinese people, who greet her warmly when they see her. When she meets Chinese people who are not familiar with the facts about Falun Gong, she calmly talks to them and lets them know the truth.

Some people have said to Ms. Huang, "This newspaper is banned by the Chinese Communist regime. Are you not afraid of being arrested by the regime for practicing Falun Gong?" She replies, "We Falun Gong practitioners live by the principles of Truthfulness-Compassion-Forbearance and all try to be good people. Why does the regime arrest good people? You all said that this newspaper has rich content and tells the truth. You wouldn't be able to see this kind of news in China. Why does the regime want to prevent people from speaking the truth? Persecuting good people and not speaking truth are not tolerated by heaven and earth."

Others have said, "You give out these newspapers here, and now many people are criticizing the Chinese Communist Party. It is like children criticizing their parents. Which Party do you belong to?" Ms. Huang replied, "I am a cultivator. I don't belong to any political party. During the decades of Chinese Communist control in China, over 80 million people have died unnatural deaths. Are there such parents in the world? Human beings should have a bottom line - to be able to distinguish right from wrong. 'Party' and 'country' are not the same concept. The Chinese Communist regime does not represent China!" Other people have told Ms. Huang, "You are very old. Don't do this tough work." Ms Huang replied, "I became very healthy by practicing Falun Gong. I have no problem getting around. I come here to give you newspapers so that you can see the truth."

Ms. Huang concluded, "The Chinese people have been brainwashed by the Chinese Communist regime for a long time and are deeply poisoned. There is still quite a ways to go to make them wake up. We should not slack off. Only by our being more diligent can more sentient beings be saved and can we live up to our mission."

Tomek started to practice Falun Gong in 1999. In his sharing he said that, because he slacked off in reading the Fa, the old forces took advantage of him, and he almost died from sickness. But at the critical point, with the help of fellow practitioners, he maintained righteous thoughts. Negating the arrangement by the old forces, he determinedly embarked on the journey to the Shen Yun meeting in Germany. After a few hours, the sickness symptoms started to disappear. The closer he got to the destination, the better he felt. A few days later, he drove home to Poland by himself. He was very aware that it was Master who helped him to stand up again. Fellow practitioners firmly stood by his side and helped him to have righteous thoughts and find his true self again. He truly understood the Fa principle "Always cultivating as if you were just starting will surely result in achieving your ultimate rank." ("Fa Teaching at the 2009 Greater New York International Fa Conference")

Piotr is a Falun Gong practitioner from middle Poland. He obtained the Fa two years ago. Before practicing Falun Gong, Tai Chi practice was an integral part of his life because he liked the ancient oriental culture very much. One day when he was out walking, he saw Falun Gong posters. Then he started to practice Falun Gong. He was deeply moved by Dafa's profound meaning and was determined to translate other Dafa teachings from English to Polish. In the course of translation, he got rid of many of his attachments. By doing the three things well and persistently, the translation went very well.

Another Western practitioner, Tomek, also shared his experience of obtaining the Fa and how he read the Chinese version of Zhuan Falun through self study, starting with Lunyu to the very end. With Master's help, he successfully translated Zhuan Falun into Polish, demonstrating Dafa's power and extraordinariness.

Romek shared his experience of organising a Shen Yun performance in Poland. He specifically discussed the importance of coordination among the whole body, Dafa disciples' responsibilities, and unconditionally looking inwards.

During the entire conference, participating practitioners felt that everyone's sharing was very moving and helped them to see their gaps and where they fell short. They hope that, through this opportunity, they will cultivate more diligently and do the three things well.