(Clearwisdom.net) Seven shows by Shen Yun Performing Arts were originally scheduled to be on stage in Hong Kong from January 27 to 30, 2010. Tickets for all seven shows were sold out within five days. However, the Chinese Communist Party (CCP) pressured the Hong Kong government to interfere with the shows, and Shen Yun was eventually forced to cancel its shows in Hong Kong. Dozens of Malaysians and the sponsors of Shen Yun in Malaysia, who had a similar experience two year ago, protested the CCP's interference in Hong Kong and other Asian countries in front of the Chinese Embassy to Malaysia. 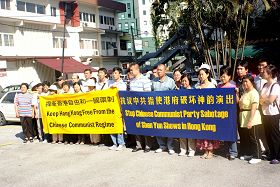 NTDTV Global Media Network and Falun Dafa Research and Training Center, the sponsors of Shen Yun in Malaysia, released a joint statement. It said that Shen Yun's experience in Hong Kong reminds them of their own experience. They protested the CCP's despicable conduct of continuous interference with Shen Yun shows in all countries.

Spokesperson Mr. Chen Zhigan said that the CCP seriously interfered with Shen Yun shows in Asia. In 2008, the Chinese Embassy to Malaysia pressured the Ministry of Culture, Arts and Heritage to cancel the Shen Yun shows. The Ministry notified the sponsors of Shen Yun at the end of February that permission to hold the shows was revoked because of the Chinese Embassy's opposition. The Ministry's response to the sponsors' repeated requests to permit Shen Yun to perform was: "The Chinese Embassy's approval is a prerequisite." The CCP has also coerced a theater in Korea to cancel its contract with Shen Yun.

Sponsors of Shen Yun hope that other Asian countries, the Malaysian government, the media, and the public will see clearly note the reprehensible conduct of the CCP in violating laws and freedoms in other countries, and will help protect Shen Yun shows from interference.