(Clearwisdom.net) The Divine Land Marching Band, composed entirely of Falun Gong practitioners, participated in holiday celebrations in Kuala Lumpur and Penang, Malaysia in December 2009. The band's performances were warmly received by the spectators. 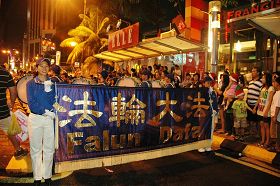 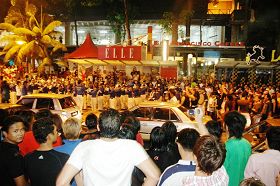 Thousands of tourists and local citizens gathered at the Christmas Countdown in Kuala Lumpur on Christmas Eve. They were fascinated by the Falun Dafa music and Christmas music brought by the Divine Land Marching Band. The music started at 11:50 p.m. As soon as the drums sounded, the spectators cheered. People warmly applauded the Christmas music. The atmosphere was warm and receptive. 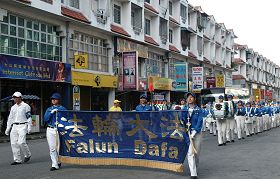 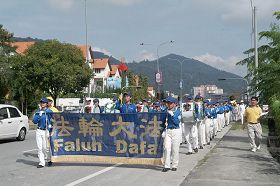 The Divine Land Marching Band holds a parade in Penang.

The Divine Land Marching Band, composed of more than eighty Falun Gong practitioners from Malaysia and Singapore, held parades in Penang on December 26 and 27. Their orderly procession and solemn music made a positive impact on the local residents, spreading the news of Falun Dafa during the Christmas holiday.

The two-kilometer-long parade on December 26 started at 9:00 a.m. The band was invited to perform on a center stage at the Bukit Jambul Department Store at 2:00 p.m. Shoppers were fascinated by the music.

The December 27 parade also started at 9:00 a.m., but this one was seven kilometers long. It passed through Sultan Azian Shah and other main roads. Cars slowed down and drivers rolled down their windows to watch the band, as Falun Gong practitioners distributed brochures. Through these festive events, more people learned about Falun Dafa.