(Clearwisdom.net) On January 16, 2010, the Swiss branch of the International Society for Human Rights (IGFM) granted its 2009 Human Rights Award to Canada's human rights lawyer David Matas and Canada's former Secretary of State for the Asia Pacific region, David Kilgour, in recognition of their efforts in investigating the Chinese Communist Party (CCP)'s organ harvesting from living Falun Gong practitioners. A symposium held on the day before the award ceremony drew attention to the appalling crime of the CCP's organ harvesting. 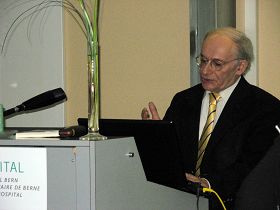 Mr. David Matas gives a speech at the award ceremony 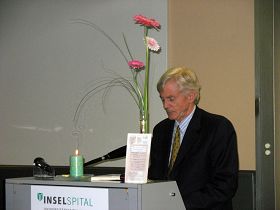 Mr. David Kilgour gives a speech at the award ceremony

Secretary General of the Swiss branch of the IGFM: Public attention needs to be drawn to the persecution

Secretary General of the Swiss branch of the IGFM, Ms. Schlegel, said the executive committee was very impressed after reading the investigative report into organ harvesting and the book, Bloody Harvest, by Kilgour and Matas. "In Switzerland, there has not been much relevant public information. We feel that this report deserves attention and discussion. Therefore we decided to give the Human Rights Award to the two authors, who have done so much."

Ms. Schlegel considered the CCP's crime of organ harvesting appalling, "It is now high time to expose this, not only among professionals but also to the general public so people could realise what is happening and stop the CCP's organ robbery together."

The President of the Swiss National Foundation for Organ Donation & Transplantation: This is a calamity of mankind

The President of the Swiss National Foundation for Organ Donation & Transplantation, Mr. Franz Immer, said that he realised through Kilgour & Matas's report and Falun Gong practitioner Liu Wei's personal experience, that many people, especially Falun Gong practitioners, were being robbed of their organs. He said, "Organ robbery, which I believe is the correct description, is a calamity of mankind. The existence of a live organ bank is indeed a catastrophe. I cannot imagine such a thing happening."

He said more people should know about these facts and pressure should be put on various governments to help the victims.

Ms. Margrit Kessler was the representative for the Swiss Patients' Association. She said when reading Kilgour and Matas's Bloody Harvest, she had to stop every ten pages due to shock, "The human rights abuses exposed in the book, the killings, were beyond imagination. It is extremely important to spread this information all over the world to let everyone know! I cannot imagine anyone will accept such organs, no one will!"

She believed that everyone should pay attention to the organ harvesting and persecution of Falun Gong practitioners in China. "To provide support, where possible point out this is wrong, it should not happen, not even in China. We should let these people (Falun Gong practitioners) live peacefully. They have the right to live, which is very important."

In his acceptance speech at the award ceremony, Mr. Matas said that the CCP did not let up the persecution of Falun Gong practitioners. After their investigation started, the amount of transplant operations in China dropped slightly but increased again later. Meanwhile the number of executed prisoners had seen a large reduction. The main sources of organ transplants were executed prisoners and Falun Gong practitioners in illegal incarceration. The decline in execution meant more practitioners were having their organs harvested.

In his speech, Mr. Kilgour also said they concluded through their investigation that since the start of the CCP's persecution up to 2005, some 41,500 organs came from Falun Gong practitioners. After their investigation, the CCP issued some regulations regarding organ transplants, which only changed transplant recipients from foreigners to Chinese without any alteration in the organ supply.

They said that the persecution had not been stopped. They would continue to lobby governments and MPs to expose the CCP's crimes. They were very glad to be able to work alongside IGFM to stop the bloody harvest still happening in China. Everyone could contact local MPs, human rights organizations or other institutions to spread the truth they had learned.

At the award ceremony, the host asked Falun Gong practitioner Ms. Liu Wei to talk about her personal experience. During her 16 months of illegal detention for practising Falun Gong, Ms. Liu was subjected to various forms of torture each day, including forced labour for a dozen hours and an allowance of three toilet visits per day. Without completing the work quota, she was not allowed to sleep. The most horrific thing in hindsight was that Ms. Liu and other practitioners had to go through mysterious physical examinations, including blood tests, electrocardiograms, ultrasonic scans, etc., the test results of which were not provided to them. At the time nobody knew why. It was not until the CCP's crime of organ harvesting was exposed that Liu Wei realised that she almost became one of the Falun Gong victims.

Ms. Liu, who lives now in Germany, said, "I am extremely lucky to be able to live in a free country. But in China there are still a huge number of practitioners being locked up in jail and labour camps, who are in danger of being victims of organ harvesting. This is not only a domestic issue for China but a violation of human morality and dignity." She hoped more people would support Falun Gong to stop this persecution together.

They passed a resolution that strongly condemned the CCP's systematic organ harvesting from live Falun Gong practitioners and called upon individuals, government institutions, medical enterprises, and NGOs to stop this appalling crime together.