Germany: Protest Against the Refusal to Renew my Passport at the Chinese Consulate in Frankfurt (Photo) 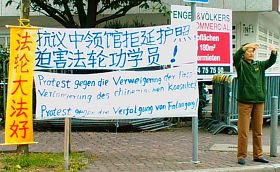 Protest at the Chinese Consulate in Frankfurt

We displayed a banner worded, "Protest against Chinese Consulate's refusal to renew passport and its persecution of Falun Gong practitioners" in both Chinese and German. This made the Chinese Consulate very uncomfortable. They called up city officials and repeatedly called the police to the site, trying to stop our display of the banner. Instead, these people learned the facts about Falun Gong. A government official from the city, who was called by the Consulate, came straight to the banner after getting out of his car and took a few photos. Then he accepted the information materials on Falun Gong with a smile and suggested to a practitioner to keep going in her effort to get her passport.

Once, two police officers, one male and one female, came to the protest site. The female police officer said loudly to a practitioner: "Did you put up this banner? Could you give me a copy of your leaflet?" After taking the leaflet, she asked: "Are there many Falun Gong practitioners who are denied their passports? How has the problem been solved?" and other questions.

On another occasion, the Chinese Consulate called for six police cars for two practitioners. A young police officer routinely registered the identity of the practitioner who was doing Falun Gong exercises. Afterwards the practitioner asked him: "Can I continue my exercising?" Copying the practitioner's movements, the police officer replied: "Yes. Please continue." Then they all left. When the protest finished, the police car came again. Police officers helped us to collect the banner. The rope got knotted so the officers found a knife to cut the rope. Now these officers all know the facts. When they are called up again by the Chinese Consulate, they just say hello to us from their car and then leave, or they park their car beside us and wait until we finish our protest.

Most German people are very kind. They want to help us after learning the truth. Once a young German lady accepted the leaflet and read it while walking. After a while she returned. With tears in her eyes, she put her arms around the practitioner and said: "I can't believe such brutal persecution still exists nowadays. How can I help you?"

Once a practitioner was doing the exercises. Somebody gently touched her hand. When she opened her eyes, she saw an elderly German lady putting money in her hand. There are also kind German people who warmly tell practitioners which organisations handle immigration. An elderly German lady asked for a copy of the Nine Commentaries on the Communist Party in Chinese and other Falun Gong materials. Her son could understand Chinese and works in Beijing. Her daughter-in-law is Chinese. She said she would take these to them when she goes to Beijing for the Chinese New Year. Some German people working in the Chinese Consulate also like to read the Falun Gong information materials and treat us very warmly.

Chinese people's attitudes towards Falun Gong have also changed significantly. Very few people are hostile now. When we talk to them about the Nine Commentaries on the Communist Party and withdrawing from the Chinese Communist Party, its affiliated Youth League and Young Pioneers, some Chinese people want practitioners to help them to announce their withdrawals on the Epoch Times website while others want to do the withdrawals themselves. There were also some people who were to return to China that day and said they would put the Nine Commentaries in their suitcase for their family and friends in China to read. A group of Chinese students said: "We all know the truth. We support you, Falun Gong!" Some students were also concerned about practitioners' safety: "You are really brave to give out leaflets here. Aren't you afraid? Please be careful." There are also some Chinese people who want to learn the Falun Gong exercises.

Sometimes we also met desperate Chinese people whose visas in Germany had expired. Their Chinese passports were also no longer valid. They wanted to return to China but the Chinese Consulate refused to issue them proof of identity. As a result they couldn't return. Moreover, the Consulate staff treated them very badly. One young man came to work in Germany as a chef. Due to the closure of the restaurant where he worked, he found work in another restaurant. Now he was injured and couldn't lift one of his arms. He couldn't work and wanted to return to China. Because his Chinese passport had already expired, he wanted to apply for a new passport at the Chinese Consulate. The Consulate told him that they would only give him proof of identity if his provincial Public Security Bureau confirmed his identity after investigation. He thought this would be very quick so he bought an airplane ticket and waited for news in Frankfurt. He didn't have money for a hotel so he spent his nights at the train station. After six days, he went to the Chinese Consulate to enquire about his application. Consulate staff completely ignored him and told him to leave. After coming out of the Consulate, he squatted on the ground and cried incessantly. A practitioner went forward to comfort him. He sobbed: "I want to go home. I want to go home." It was very distressing to hear this. His flight was the next day. He could not speak German and didn't know what to do. A practitioner told him about Falun Gong during the talk. After learning the truth, he declared his withdrawal from the CCP and asked the practitioner to write down "Falun Dafa is good! Truthfulness-Compassion-Forbearance is good!" on the little booklet he carried. He then looked better. Just then a young Chinese fellow came out of the Consulate after finishing his business. The practitioner asked him if he could help. He readily agreed and was willing to accompany the chef to first return his air ticket, and then to the police station until the problem was solved.

Those Chinese people who couldn't stay in Germany, but also couldn't return to their home country, personally experienced the Chinese Consulate's terrible treatment. They saw clearly the evil nature of the CCP and were willing to withdraw from it. They also learned that Falun Dafa is good.