(Clearwisdom.net) The sun shined brightly for the monthly market day on September 5, 2009, in Goulburn, over a hundred kilometers away from Canberra, Australia. Falun Gong practitioners participated in the event. They set up the stands and displays, sharing the magnificence of Falun Gong with the public and exposing the persecution of Falun Gong by the Chinese Communist Party (CCP). 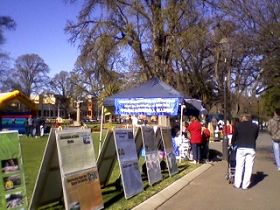 Practitioners explain the facts about Falun Gong in Goulburn

Passersby read the display posters and were shocked at the persecution taking place in China. One elderly lady was very moved and had tears running down her face.

Many took informational flyers and English versions of the Nine Commentaries on the Communist Party. More people learned to do the Falun Gong exercises after learning that the practice improves physical and mental wellbeing.

One Goulburn man told a practitioner, "You have brought energy to Goulburn." He sat and talked to the practitioner for over an hour and wanted to learn the practice. A few others sat and learned some of the exercises.

One lady that came up said she had learned Falun Gong a few years ago in Yamba, but she had moved and lost the practice environment. After talking to a practitioner, she said she was going straight home to pick up Zhuan Falun again and start practicing.

A trio of Chinese men came by, two about 40, and the other about 60. When a practitioner tried to hand them a brochure, the two younger men wouldn't take it, but the older man accepted it gladly. He let the younger men walk ahead as he looked over the display. The practitioner gave him a Chinese version of the Nine Commentaries, which he also accepted. Then he came back to the information booth and asked for a cover for the Nine Commentaries and a DVD, and he quickly placed them in his pocket, trying to hide them. He walked away, very happy with what he had.

One local stall holder came up and said, "We have been watching you all day and think what you are doing is very good. We would welcome you back any time."