(Clearwisdom.net) At noon on August 17, 2009, officials from the Hailin City No.1 Police Station in Heilongjiang Province broke into Ms. Zhou Huifang's health gym and arrested her. They sent out three police vehicles to ransack her home and confiscate her personal belongings, including printers and computers. 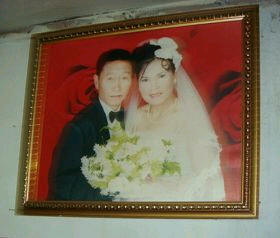 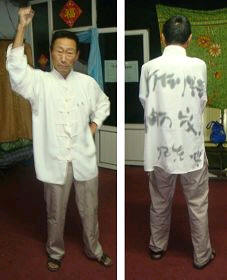 Wearing a sleeveless shirt with "Dismantle the Evil CCP, Cry Freedom" written on it, Mr. Huo Jiuxian went to the Police Department to request his wife's release. 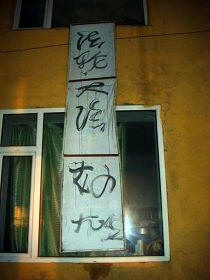 Banner on the window of Mr. Huo Jiuxian's house with "Falun Dafa is good" written on it

Mr. Huo Jiuxian standing beside the banner of "Falun Dafa is good," calling on everyone in this world to be aware of it. 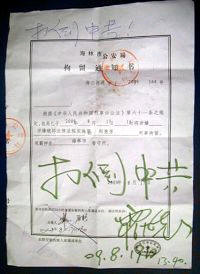 Mr. Huo Jiuxian, Ms. Zhou Huifang's husband went to the No.1 Police Station to request his wife's release. However, officials there threatened their son and daughter-in-law to take Mr. Huo back home.

On the following day, wearing a sleeveless shirt with, "Dismantle the Evil CCP, Cry Freedom" written on it, Mr. Huo Jiuxian again returned to the police department to request his wife's release. Officials there took a video of him and ordered his son to take him back home.

Mr. Huo Jiuxian was severely persecuted by the CCP during the Cultural Revolution. Now his wife has been arrested by the police. Whenever he thinks about his wife's misfortune, he cries uncontrollably. In order to let people be aware of the evil nature of the CCP, Mr. Huo wrote, "the arrest of my wife proves how evil the CCP is!"