Japan: Support for the 61 Million Chinese Who Quit the Communist Party: "You Are Doing the Right Thing!" (Photos)

(Clearwisdom.net) As the number of Chinese people who have quit the Chinese Communist Party and its affiliated organizations approaches 61 million, the Japan Service Center for Quitting the CCP organized a parade in Tokyo City on September 20, 2009, calling on Japanese people to support the movement and giving Chinese in Japan a chance to learn the facts and quit the CCP. 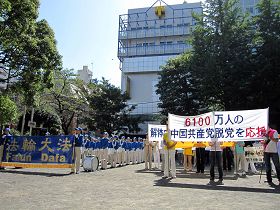 The rally before the parade 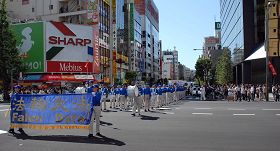 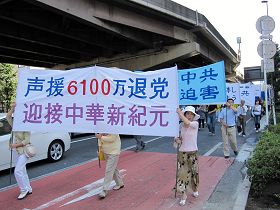 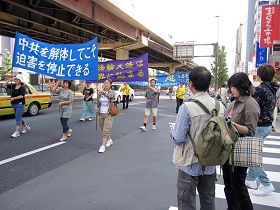 Parade in Tokyo to support 61 million Chinese quitting the CCP 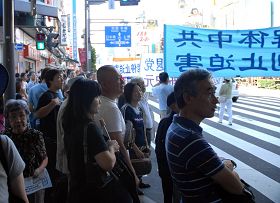 On the afternoon of September 20, representative Kunio Sato from the Japan Service Center for Quitting the CCP gave a speech at the rally before the parade. He called on the attendees to expose the CCP's human rights violations and the truth behind the persecution of Falun Gong. He also urged overseas Chinese to call the service center to register their announcement to quit the CCP. He said similar events will be held every two months.

During the hour-long parade, the loud speaker continuously broadcast information about the crimes the CCP committed against Chinese people, especially the brutal persecution of Falun Gong. It also called on people to be aware of the current situation in China and support the Chinese who have quit the CCP.

The parade started from Awaji Park, marched through the famous Akihabara shopping area for electronics, and completed at Ueno Park. It was held on the second day of a five-day holiday, so there were a lot of people in the streets. Many stopped to read the banners and ask for more information during the parade.

Parade participant Mr. Xia Yifan used to be the principal engineer of Shantou Protected Tax Zone in Guangdong Province, China. For exposing the corruption of Communist officials, he was retaliated against and persecuted. He then fled to Japan. Mr. Xia said, "I hope my fellow Chinese can have the courage to express their opinions and quit the CCP. Use this action to show your indignation at the CCP's occupying our country for 60 years."

During the parade, a Japanese man applauded warmly. He said his name is Seki and he supports the Chinese people's effort very much. "China is still an egalitarianist country while Chinese people are working toward a democracy. " He said, "I believe China will be a democratic country like Japan and South Korea." When he learned about the CCP's persecution of Falun Gong, he said, "This is absolutely unacceptable. God will not allow it. You must expose it. Human rights must be respected. I support your efforts."

Businessmen Seo and Ma from Korea also expressed great interest in the parade. "The Chinese Communist Party is very bad," Seo said, "I know about Falun Gong. A lot of Koreans practice it. I know the meaning of the parade." Ma added, "The parade is great! They are doing the right thing (in exposing the CCP's atrocities)."

Ms. Zhao came from China and she has been in Japan for two months. Seeing the parade for the first time, she was shocked and bewildered. After getting more information, she realized that the CCP is more evil than she knew and Falun Gong is not like what the CCP propaganda depicts.

Ms. Noga works in a library in Israel and she happened to be visiting her daughter in Japan. Since her daughter wanted to participate in the parade, she decided to join too. When she saw so many people busy preparing for the parade, she volunteered to distribute fliers along the route. She is 68 years old, but she walked quickly and passed out a lot of fliers. She said she was not even tired after the hour-long parade. "Today's parade was exciting. I am very happy I could help. I enjoyed seeing people's expressions when I gave them a flier. They appeared to be interested, excited and friendly. I told them what Falun Dafa is and why we are participating in today's activity. It was great!"