The theme of the parade this year was "Making Music in Kirkwood." The parade route was about tow miles long, with thousands of spectators lining the streets. 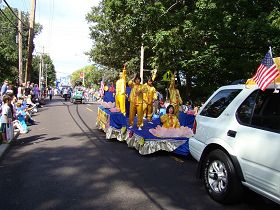 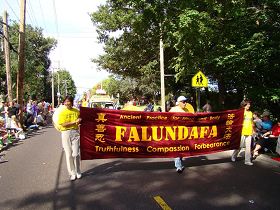 The Falun Gong banner at the front the practitioners' entry 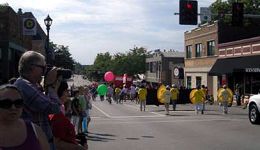 A view of a section of the Falun Gong entry

The practitioners received a warm response from the parade spectators, many of whom had not heard of Falun Gong before. People were happy to accept flyers and bookmarks introducing Falun Gong. 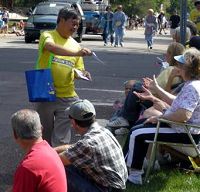 Passing out brochures about Falun Gong

Many spectators were moved by the practitioners' music, and a number of comments were heard about how peaceful and beautiful the music was. Quite a few people took photos of the Falun Gong group.

The host of the parade introduced Falun Gong to the spectators, saying, "The belief in Truthfulness-Compassion-Forbearance will bring peace to the world."