(Clearwisdom.net) On September 12, the Indian community in St. Louis, Missouri held a South Asian Culture Festival. Local Indian Falun Gong practitioners attended the festival and introduced Falun Gong. Over the course of the event they passed out stacks of informational materials. 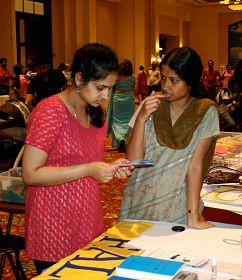 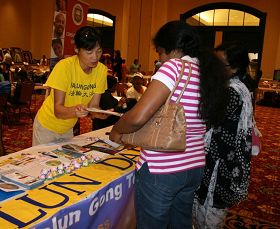 Indian people are familiar with the concepts of meditation, and many expressed an interest in learning Falun Gong. People enjoyed the hand-made paper lotus flowers, which are a symbol of purity.

An Indian gentleman expressed interest in learning the exercises. He is to go back New Delhi next month. The practitioners told him that he can find exercise sites in many cities in India. A young American man talked to practitioners. He had never heard about Falun Gong before, but after talking to the practitioners, he said, "This is what I have been looking for."

The practitioners also exposed the brutal persecution of Falun Gong in China. Many people at the festival condemned the persecution.