Mr. Li Wanyun and His Wife Suffer Severe Persecution before His Death from Persecution (Photos)

(Clearwisdom.net, Jilin) After the Chinese regime began its persecution of Falun Gong in 1999 Mr. Li Wanyu and his wife, Ms. Sun Wanmei were sent to forced labor camps two times. Mr. Li was severely mistreated in the Chaoyanggou Labor Camp of Changchun City and ended up in a critical condition. The labor camp released him temporarily for medical treatment, although the CCP officials continued to harass him and tried to extort money from him. He died on August 3, 2006. 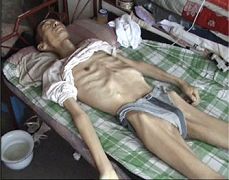 The following describes the experiences of Mr. Li and his wife Ms. Sun.

Mr. Li was born on September 8, 1962 and worked as a correctional officer in the Xingye Prison, Changchun City. After the CCP started to persecute Falun Gong on July 20, 1999 Mr. Li and his wife went to Beijing to appeal for Falun Gong and were arrested and detained for 15 days. Following their detention the local police department, local police station and officials of his residence area went to his home continuously to harass him. They tried to prevent him from going anywhere. Mr. Li and his wife remained steadfast in their belief in Falun Gong. Because of this they were fired from their jobs at the same time. The entire family lost their financial income.

In 2000, based on some fabricated accusations, the authorities sent the couple to a labor camp. In the labor camp they were subjected to all kinds of torture. The skin all over Mr. Li's body festered to the point that he could not put on any clothes. He was not released until November 2000.

In February 2002, the couple was arrested by the Lingxi Police Station of Gongzhuling City and their home was ransacked. Police took away a bank deposit note worth 12,000 yuan and 3,000 yuan cash from their home.

The couple were sentenced to forced labor for three years again, where they suffered all kinds of inhumane torture. In the Chaoyanggou Labor Camp of Changchun City Mr. Li was cruelly persecuted and became emaciated as he suffered from bone marrow disease. He also became paralyzed. He was in critical condition when he was released for medical treatment in June 2003. CCP officials only released him after extorting 3,000 yuan from his family members.

After Mr. Li was released he gradually recovered through reading Falun Gong books and doing Falun Gong exercises. He went to the local police station to claim his money that was taken by police, but was intimidated by them and didn't receive it. Later the police had to acknowledge that they did take the bank deposit note worth 12,000 yuan. Mr. Li reminded them of what they had done, but they still denied they had taken the 3,000 yuan cash from Mr. Li's home. After that Mr. Li went to them for the money many times. Eventually they returned to him 6,000 yuan in total, but never returned the remaining 9,000 yuan.

During this period, CCP police monitored and shadowed Mr. Li's every move. Mr. Li suffered greatly and died on August 3, 2006.

Mr. Li started to practice Falun Gong in October 1997 in Changchun City. At his job he had a good reputation for his work and his personality. His wife, Ms. Sun Wanmei, was in terrible health and suffered from severe headaches before she took up the practice of Falun Gong in 1997. Through practicing Falun Gong the headaches disappeared and her overall health had dramatically improved.