(Clearwisdom.net) Falun Dafa practitioners in Johor Bahru, a southern city in Malaysia held a series of activities over the past several weekends in local super markets. They demonstrated the Falun Gong exercises and other aspects of traditional Chinese culture and informed the local people about the persecution of Falun Gong in China. 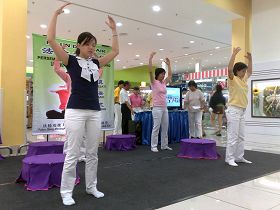 Since the persecution of Falun Gong began in 1999, many media repeated the lies fabricated by the Chinese Communist Party. As a result, many people have had misunderstandings about Falun Gong. Such an activity provides many people who have misunderstood Falun Gong an opportunity to learn the truth.

The waist drum team composed of Singapore practitioners came to support. Their performance was warmly received by the audience. The management of the super market arranged the waist drum team to parade through the two-story building so that staff members of each shop in the supermarket could watch their performance. They were happy to accept truth-clarification flyers, bookmarks and handmade paper lotus flowers from Falun Gong practitioners.

The series of activities attracted many people to come to learn to practice Falun Gong.