The 2010 World Expo is to be held in Shanghai. Zhou Yongkang, former Minister of Public Security of the People's Republic of China and head of the Central Political and Legislative Committee, and a major persecutor of Falun Gong, arrived at the Shanghai World Expo Coordination Bureau on June 20, 2009. Zhou made a number of statements in Shanghai, including, "The Shanghai World Expo is another important international event similar to the Beijing Olympics," "Safety is the most important element to hosting a successful World Expo," and, "We must protect the safety and security of the World Expo." He then ordered a crackdown on any perceived dissent, thereby beginning yet another intense campaign of persecution of the Chinese people. 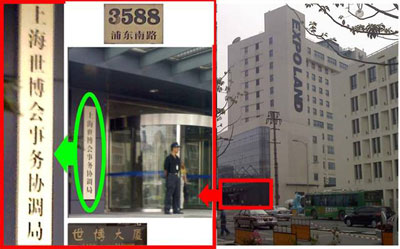 After the 2008 Beijing Olympics, the Shanghai government, in preparation for the Expo, spent a huge amount of money on a "beautification project" to create the illusion of prosperity for the Expo visitors. At the same time, just as in the run-up to the 2008 Olympics, a brutal crackdown began on many innocent people. People have been monitored and arrested; homes of Shanghai residents have been torn down to make way for new buildings, and human rights advocates are being detained and persecuted.

At the beginning of 2009, Jiang Zemin, the chief criminal who orchestrated and maintains the persecution of Falun Gong, returned to Shanghai where he issued the slogan, "Successful Olympics, Splendid World Expo." He also instigated another crackdown on Falun Gong practitioners under the pretext of "ensuring the safety of the World Expo."

On December 13, 2008, the core committee of the Shanghai CCP issued a decree called the "Four Guarantees." Liu Geng, former director of Shanghai Tilanqiao Prison and former chief of the Political and Legal Committee of Shanghai, claimed that the most import guarantee of the "Four Guarantees" is to use all means necessary to protect their preparations for the World Expo. On December 18, 2008 with 500 days were left to go, all the CCP organizations in Shanghai, including the police, began to "eliminate" and "resolve" what they consider as "potential embarrassments" for them.

Immediately after the 2009 Chinese New Year, Falun Gong practitioners in Shanghai started to experience a new round of persecution. Many practitioners were harassed or arrested by the police. In February 2009, seven arrests were reported and seven Falun Gong practitioners were transferred to brainwashing centers or detention centers. The Shanghai Police Department is running a "Safety Project," which includes the installation of video cameras all over the city. Even in the Pudong District, police patrols are everywhere, with 24-hour patrols in many areas. Cameras were also installed in several of the older and smaller surrounding districts. 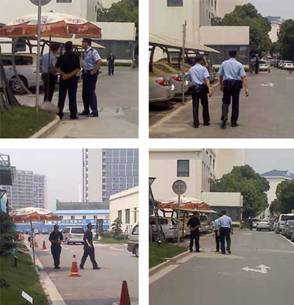 On May 1, 2009, one year away from the World Expo, the persecution began in earnest. Within one month, 21 Falun Gong practitioners were arrested, including an entire family arrested after their home was broken into.

I would like to call on the international community to please pay attention to the ongoing persecution that the CCP regime is inflicting on the people of Shanghai. Please investigate the crimes of the CCP, which is now using the upcoming World Expo as an excuse to continue violating basic human rights and the freedom of religion. 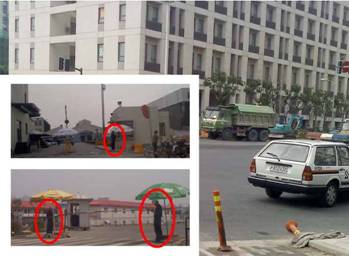 High security, including a strong police presence at the site of the World Expo. All vehicles need to be documented while passing the gate.

Shanghai Falun Gong practitioners persecuted in the first half of 2009: