(Clearwisdom.net) Because of the persistent efforts by Falun Gong practitioners to clarify the facts during the last 10 years, in spite of the cruelest persecution in human history, more and more people have been moved by the tremendous sacrifices made by practitioners, and they have learned about the crimes that have been taking place against Falun Gong in China.

On July 20, 1999, the Chinese Communist Party (CCP) started to use the nation's resources to persecute more than 100 million practitioners in China, kindhearted people who simply wanted to improve themselves physically and mentally through following the principle of Truthfulness-Compassion-Forbearance. The CCP carried out a massive number of arrests all over China. Following its policy of "destroy their reputations, cut off their financial resources, and physically eradicate them," the Communist regime led by Jiang Zemin attempted to completely annihilate Falun Gong within three months. Over the next several years, as Falun Gong practitioners maintained a rational and tranquil state, they steadfastly held onto their righteous beliefs and refused to be cowed by the extreme physical violence and torture. The regime continued to escalate the persecution against Falun Gong. It enforced such policies as, "It is not a crime to beat a Falun Gong practitioner to death. If a Falun Gong practitioner is beaten to death, it is counted as a suicide." Another enforced policy is, "There is no need to carry out an investigation into the death of any Falun Gong practitioner. Cremate the body immediately." The persecution was pushed to the extremes.

Over the last ten years, practitioners in China have made tremendous personal sacrifices in their efforts to break through the information blockade imposed by the regime, and they have regularly submitted reports about the CCP's heartless crimes to the Minghui/Clearwisdom website. The website has gathered an astounding number of first-hand reports of persecution cases over the last 10 years. The extent of the persecution is truly shocking. The Minghui Data Center has started the massive task of organizing and categorizing the reported cases of persecution.

This article provides a few statistics on the reported cases of persecution that the Minghui website received from June 1, 2002, to July 15, 2009. Behind the numbers, one can see that the persecution against Falun Gong practitioners that was initiated, carried out, and enforced by the Communist regime is unprecedented in terms of the amount of area that it covered, the number of people who have been victimized, and the cruel extent of the persecution. 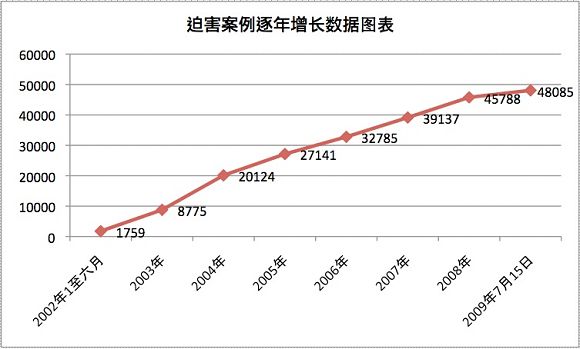 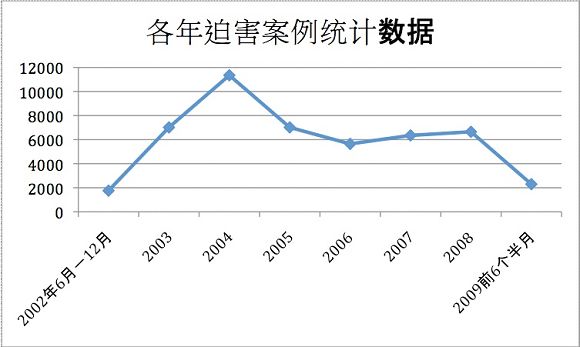 From the chart that shows the number of reported cases of persecution each year, one can see that because of the persistent, stoic, peaceful, and rational efforts that Falun Gong practitioners have made to combat the persecution, the righteous force has been strengthening continuously, and the evil has been continuously eliminated. Even though it still persecutes practitioners, it is no longer as audacious as it used to be several years ago.

The following table shows the number of reported cases of persecution in each Chinese province:

In their independent investigation report entitled Bloody Harvest - A Revised Report into Allegations of Organ Harvesting of Falun Gong Practitioners in China, two prominent Canadian lawyers, David Matas and David Kilgour, pointed out that, according to the official statistics from the Chinese government, after the persecution against Falun Gong started, the total number of organ transplants in China performed during the five years from 2000 to 2005 reached 60,000. This reflected a sharp increase over the previous five years. In 41,500 of those cases, the Communist regime couldn't explain the origins of those organs.

The Minghui Data Center performed an analysis on the reported cases of persecution and provided a breakdown of the various types of persecution used against Falun Gong practitioners as well as the number of victims in each category.

The analysis shows a disturbingly high number of cases in which practitioners have been physically abused. The cases by specific means of persecution methods include the following:

Hoisted off the ground and left hanging for long periods of time: 2,123 cases

Left outdoors in the winter and exposed to cold climates: 1,757 cases

Forced to sit on narrow stools for long periods of time: 1,614 cases

Bound with ropes for long periods of time: 1,311 cases

Burned with fire or scalded with boiling water: 790 cases

Other forms of cruel tortures: 2473 cases

Cases in which practitioners have been mentally tortured include the following:

Mentally abused in forced brainwashing centers (forced to read, watch, and listen to material against Falun Gong; monitored by people who stayed right next to the practitioners 24 hours a day; or deprived of sleep for long periods of time): 8,194 cases

The data about cases where practitioners experienced human rights abuses include the following:

Arrested without any legal procedures being followed: 56,274 cases

Summoned, tried and judged without any legal procedures being followed: 25,979 cases

Fired from jobs or expelled from schools: 1,474 cases

Other human rights abuses not included above: 2,232 cases

The cases where practitioners suffered financial losses include:

Had their valuables confiscated: 4,577 cases

Illegally fined (including practitioners and their employers): 3,358 cases

Had their property taken away: 39 cases

Other cases of persecution include:

Other types of persecution: 2,274 cases

Falun Gong practitioners have made it through 10 years of their grand journey in their efforts against the persecution. In this extraordinary and unique period of time, they have maintained their calm rationality, steadfast belief, and selfless sacrifice to provide the world's people the opportunity to learn the truth. As a result, people have learned how Falun Dafa has spread throughout the human world and felt the benevolence of Dafa. Furthermore, they have come to understand how the practitioners have transcended their own pain and suffering to spread the light, and recognized the cruelty of the Chinese Communist Party and how it is doomed to fail.