A Judge in Taiwan Who Enjoys His Work

(Clearwisdom.net) Mr. Gu Jinnan is a judge on the Taizhong Branch of the Taiwan High Court. He is modest and amiable, usually with a smile on his face. Although he is 65 years old, he looks energetic, his skin is delicate, and he has black, smooth hair.

Eight years ago, Mr. Gu did not look like that. He remembered when he was just over 50 years old, his little granddaughter climbed onto his shoulder and pulled out his white hairs. Soon after, he began to notice more and more white hair, and did not dare allow his granddaughter to pull out any more of them. As time passed, half of his hair turned white. Mr. Gu's hair is now pure black, and only a small amount of white can be seen. It is hard to imagine now how he looked with half of his hair white. Mr. Gu said with a smile that such a drastic change resulted from his cultivating Falun Gong. 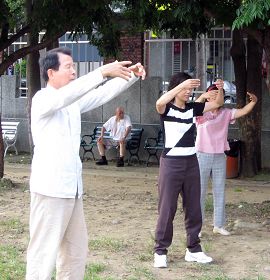 Mr. Gu's body was not strong when he was young. He left school in the second grade to help his family on their farm. When he entered the military, he was assigned light work due to his heart trouble. He decided to become a judge, and to give himself enough time to study and participate in a series of government tests. His work progressed smoothly; however, he was in poor physical health. A form of genetic bronchial disease caused him to cough frequently, summer or winter. He had allergies, and although this was treated surgically, he had frequent discharges with bad odors.

On July 20, 2001, Mr. Gu's transformation began. His friend visited, gave him the book Zhuan Falun, and introduced him to Falun Gong. This friend had nearly passed away due to cancer, but because he practiced Falun Gong, he was transformed from near death to an energetic person. He himself witnessed the miracle. After his friend left, Mr. Gu read through half of Zhuan Falun without pausing, then asked about the exercise site. Early the next morning, Mr. Gu went there to practice Falun Gong. Now, eight years have passed, and everyone near him has witnessed the change in Mr. Gu. When his colleagues meet him, they usually like to begin a conversation about how he has changed. Mr. Gu always cordially invites his co-workers to begin practicing Falun Gong.

Mr. Gu became younger, and even much healthier than he was in his youth. One of the reasons for this change is that Mr. Gu does not care about hardships; he just perseveres in practicing Falun Gong. When he just started to do the meditation exercise, his legs were too stiff for him to cross them, and he could not stay balanced and kept falling backward. He had to use a support to keep his balance. However, this did not alter his confidence in the practice. He tried his best to adjust his body to comply with the standard and increased his time doing the meditation exercise.

Falun Gong cultivates both the mind and body. Besides the transformation of one's body, upgrading one's xinxing is an important step. Mr. Gu follows the teachings of Falun Gong by being compassionate to all and considerate of others. These transformations are also reflected in his work. Mr. Gu said, "Before and after my cultivation, the change in my work has been immense." It is well known that a judge's work is arduous and stressful. The stress makes for extreme nervousness and results in both a tired body and a tired mind. Many judges prefer to resign due to the stress, an unsatisfied life, or their bad health.

After he started to practice Falun Gong, Mr. Gu experienced a completely different feeling. He said, "Now I have a healthy body and a cheerful mind. I do not feel the stress from work. My work is efficient and I try my cases quickly. I am fully competent at my job, so there aren't any unmanageable cases. "

Mr. Gu regards Truthfulness-Compassionate-Forbearance as his life philosophy, is considerate of others on all occasions, and never gets into disputes. His relationships are very good. Within the court system of assigning cases to the branch courts, the difficult cases are not always welcome, and it is hard to avoid some conflicts in the process. However, there are no such problems with Mr. Gu. Even when difficult cases are assigned to him, he just tries them without any argument.

During a trial, Mr. Gu always shows consideration for the litigants and lawyers, from multiple perspectives. For example, while trying a case, the litigants often ask a judge to transfer more proof in order to solve their difficult problems, such as where to send an investigation letter, where to shift materials, etc. This prolongs the court time and increases the workload for the judge. Mr. Gu always considers the requirements from their individual standpoints, understands their perspectives, and tries his best to comply with the litigants' demands. Sometimes, there is a conflict where there isn't enough court session time for a lawyer to try all of his cases. Mr. Gu will then adjust the schedule according to the lawyer's available time. Based on the principle of Truthfulness-Compassionate-Forbearance, Mr. Gu's tone and manner allows litigants and lawyers to sense his compassion and sincerity, which relieves their stress. Since the case results are reliable, he has won their trust. Mr. Gu has always been the judge most frequently chosen by litigants and lawyers among the branch court. During his nearly thirty years of work in the court, many of his fellow judges that were much younger than Mr. Gu have already resigned; the proportion is quite high. So far, Mr. Gu has no intention of retiring.