Heartfelt Voices from Around the World (Photos)

From July 16 to 19, 2009, nearly three thousand Falun Gong practitioners held a series of events in Washington DC to mark the tenth anniversary of peaceful protests against the Chinese Communist Party's (CCP) persecution. Over the past ten years, around the world, practitioners have continuously spoken out, sharing the goodness of Falun Gong and exposing the CCP's brutal persecution of Falun Gong in China. The following are remarks by practitioners from around the world who traveled to Washington to take part in the recent activities.

Thomas from Sweden: Raising awareness of the brutal persecution 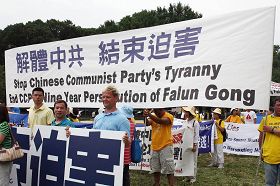 Thomas Pompe, from Sweden, said, "I started practicing Falun Gong when I was 15 years old in 1998. I have practiced for 10 years and I feel very good physically and mentally. I have been here [to Washington] two times."

He continued, "Because Falun Gong is very badly persecuted in China, we want to raise awareness about this very brutal persecution. I think it's very important to be here in Washington DC because there are many influential people and [we need to] to clarify the truth to them, like what is Falun Gong really about and why is it so brutally persecuted in China.

"I am holding a banner and it says 'Stop the Persecution of Falun Gong' (in Chinese)."

Zena from Latvia: It is important to be here 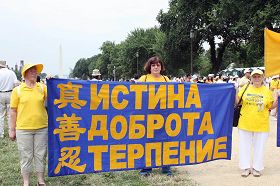 From left to right: Zena from Latvia, Irena from New York and Roya from Moscow

Zena from Latvia has practiced Falun Gong for 4 years. This was her first time to attend activities in Washington DC. She said, "I am really happy to participate in the events. It is really important for me to meet so many practitioners from all around the world and join them to call for an end to the persecution."

Irena from New York: Support the effort to stop the persecution

Irena, from New York shared, "My name is Irena. I am from New York and I have been practicing Falun Gong for 8 years. Every year I come here to join all practitioners to support this movement to stop the persecution in China, because what is going on is terrible and should definitely be stopped. Every year for 8 years, I did not miss even one year to come to Washington, because the federal government is here and needs to know what is going on. Governmental officials have to show their great support."

Roya from Moscow: Stop the perpetrators in the persecution of Falun Gong

Roya from Moscow has practiced Falun Gong for 7 years. This was her second time to come to Washington DC. She said, "This year is a special time as it has been 10 years since the persecution started. I would like to be with all the practitioners around the world. We come together to support all the practitioners in China and call for a stop to the persecution of Falun Gong. It is very important for the people right now in China, trying to be righteous. The people who persecute Falun Gong practitioners have to stop doing this as it is bad for them." 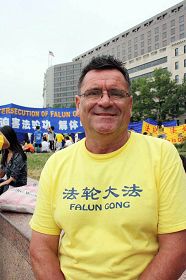 John from Hawaii has been practicing Falun Dafa since 2000. He said, "This is my third year in Washington DC. I traveled here from Honolulu, Hawaii. My main purpose in being here today is to clarify the truth about Falun Gong and call for an end to the 10-year persecution of Falun Gong. I usually walk alongside the march and pass out flyers.

"After practicing Falun Gong, I just feel more energetic and sleep better at night, and I quit smoking the first time I practiced Falun Gong. It is such a great way to release stress, to sit and do the meditation." 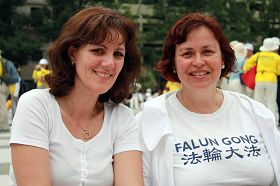 Christina from Romania said, "This is my first time in Washington DC. I have practiced Falun Dafa for 8 years. Practicing Falun Dafa changed my life. I was reborn the moment I started to practice. Everything changed about me, my thinking, the way I see life, the way I see relations with other people, with my family. It gives meaning to life."