UK: Rally Held on Parliament Square to Commemorate the 10th Anniversary of the Persecution (Photos)

On July 20, 2009, UK Falun Gong practitioners rallied in the square adjacent to the Houses of Parliament and Big Ben to mark the 10th anniversary of the Chinese Communist regime's persecution of Falun Gong. Their activities attracted the attention of UK politicians and the general public. 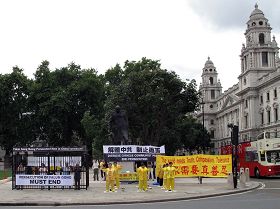 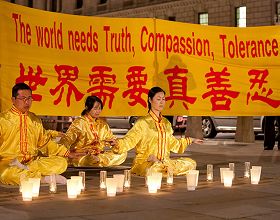 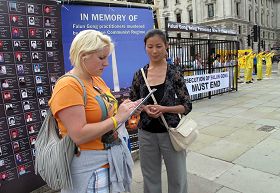 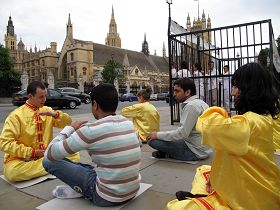 On this special day, the activities organized by Falun Gong practitioners lasted from 9:00 a.m. to 11:10 p.m. With Big Ben's melodious chimes in the background, people in the square were moved by practitioners' explanations about the truth of the persecution and the fact that only with the disintegration of the Chinese Communist Party (CCP) will the persecution stop.

While some practitioners in golden uniforms demonstrated the peaceful Falun Gong exercises, others reenacted the cruel torture perpetrated by the Chinese regime against Chinese practitioners who believe in the principles of Truthfulness-Compassion-Forbearance.Photos of many of the 3200 Falun Gong practitioners who were persecuted to death, along with the truth-clarification information on display, caught the attention of passersby. Many of them made a point to cross the street to see the displays and get information. Practitioners distributed truth-clarification flyers and solicited signatures for a petition protesting the persecution.

Because the Parliament Square is a popular tourist attraction in the London area, there are many people there throughout the day. From strolling tourists to formally-dressed politicians from around the world, they expressed their support for Falun Gong and their opposition to the persecution. Some of them even asked practitioners to teach them the Falun Gong exercises on the spot.

Other members of the European Parliament also sent letters to support the event. They unanimously expressed their understanding, support, and appreciation for Falun Gong practitioners' peaceful petition as well as their condemnation of the Chinese regime's atrocity of persecuting Falun Gong and abusing human rights.

Mr. Gerard Batten, Member of the European Parliament:"The Chinese Communist regime is the most atrocious tyranny in history, and it will not last long." 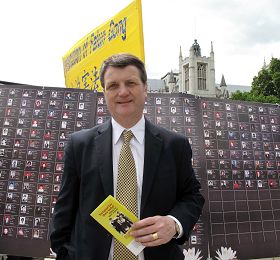 Because one of his constituents is a Falun Gong practitioner, Mr. Gerard Batten, Member of the European Parliament, has known about the persecution of Falun Gong since 2004, and he has read the Epoch Times' editorial series the Nine Commentaries on the Communist Party.

At the rally, he said, "Why are the Falun Gong practitioners being persecuted in China? The answer is very simple, it's because of what they stand for. Their three core values are Truthfulness, Compassion, and Tolerance. These are the exact opposite of what the Chinese Communist Party stands for, which of course are lies, brutality, and intolerance."

"People are standing up against it and the more that speak out, by example, the more people will follow until you have in China what we've seen across other Communist states when so many people stand up and are opposed to it - that eventually it crumbles and will fall apart. That's what we will see in China."

Mr. David Burrowes, UK Member of Parliament: "The persecution should not exist for another single day." 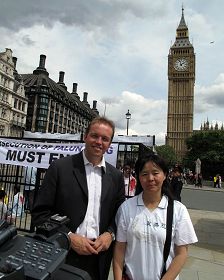 Mr. David Burrowes, UK Member of Parliament, came to the rally as well. When interviewed, he said, "I come here today to express my support, as I understand that the Chinese regime abuses human rights and commits the crimes of organ-harvesting and persecuting Falun Gong practitioners."

"I stand here to appeal that the persecution must not be continued for another ten years, one month, or even only a single day. We should try our best to ensure that there is no need for Falun Gong practitioners to hold a rally here to oppose being persecuted."

Mr. Xu Yi, Chinese pro-democracy advocate in the UK: "The disintegration of the CCP is the only solution to the persecution of Falun Gong." 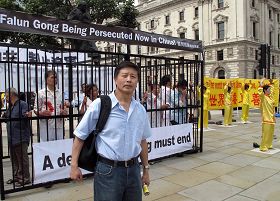 Mr. Xu Yi, a Chinese pro-democracy advocate and a member of the Global Quit the CCP Alliance in the UK, also spoke at the rally. When asked his views on the theme of "Only with the disintegration of the CCP can the persecution be stopped," he said, "I fully agree that the disintegration of the CCP is the only solution to the persecution of Falun Gong. As long as the CCP is in power, China will never be at peace, and existing atrocities, such as the persecution of Falun Gong, will continue, while new instances of persecution, like what happened in Tibet and Xinjiang, will be inevitable. The only thing that is unpredictable is that we don't know where new acts of persecution will take place. But we are sure that there will will be, as that is the essence of the CCP."