On the afternoon of June 13, 2009, Ms. Li Xiuzhen was once again arrested by plainclothes policeman. She used to be a kindergarten teacher at Hongshagou Town in Anqiu City, Weifang of Shandong Province, although she has been jobless and unable to return to her home and family for many years in her efforts to avoid persecution. The police tied her up and took her to her rented room where they took away two desktop computers, two printers and some cash as well as other personal belongings.

Li Xiuzhen is in her 50s. Persistent in her belief in Falun Gong, refusing CCP demands to renounce her faith, she has been arrested nineteen times. She has been sentenced to 7 years of imprisonment, cruelly force-fed over 600 times, and tortured and humiliated with a dozen of different torture devices.

Before Li Xiuzhen started her cultivation in Falun Gong, she had poor health and possessed many illnesses. In the year 1978 she was in an accident and her right leg was fractured, the joint dislocated. Due to the impact of the blow, she suffered perpetual headaches. She was also diagnosed with gastritis, ptosis of the stomach and gynecological problems, etc. Since she started to practice Falun Gong in 1998, she has become healthy again, enjoying a much happier family life.

Below are the details of the persecution suffered by Li Xiuzhen.

In October 27, 2000, Li Xiuzhen was arrested and incarcerated in Anqiu Detention Center. She was force-fed by policeman Cheng Shuping. She was then sent to the Jinan Forced Labor Camp For Women but was refused admission. She was also rejected when sent to Zibowang Village Forced Labor Camp. So she was sent back to Anqui and continued to be locked up in the detention center. Three days later, she was released and she went home to sleep for the night.

The following day, Li Xiuzhen was monitored by the town police station. At 8:00 pm, Song Shuling, head of Politics and Law Committee of Hongshagou Town and Wang Jiaming, head of the police station, led a dozen policemen to Li Xiuzhen's house. They used police batons to break open the door and windows and forcefully took Li Xiuzhen to the police station. They handcuffed her to a chair. When it was morning, Dong Shulin, deputy head of Politics and Security Section of Anqiu Police Department, Song Shuling and Wang Jiaming sent Li Xiuzhen to the Jinan City Forced Labor Camp. They used unscrupulous means such as giving gifts and treating the guards to wine so as to make the labor camp officials accept Li Xiuzhen.

On the same night, Li Xiuzhen went on a hunger strike to protest. She was dragged upstairs by the guards and cruelly force-fed. The next day, she was handcuffed to the bed. She was then hung up for an entire day. When she was let down, there were big sores all over her body and she fainted from the inflicted pain. Li Xiuzhen continued her hunger strike and five days later, she was released.

2. Sentenced to 7 years of imprisonment

On November 29, 2001, Li Xiuzhen was arrested by Changle policeman and was incarcerated in the Changle Detention Center. She went on a hunger strike continuously and as a result she became very weak. Changle policemen Qian Wenting, Zhang Zhili, Chang Quanbin, Du Haotao, Hao Chengshan and Li Qingguo, police head, forcefully subjected her to 7 years of imprisonment. In January 2002 she was sent to Jinan Women's Prison.

Li Xiuzhen was incarcerated in a dark and humid solitary cell without a bed. She was also locked to a metal chair and both her hands were handcuffed behind her. They used smelly shoes and rotten cloths to gag and taped her mouth. Her weight was only a little over twenty kilograms from the torture, until then the prison personnel informed the family members that she was on the verge of death.

The guards at Jinan Prison crazily beat and scolded her because Li Xiuzhen meditated. She was cruelly beaten 5 to 6 times each day. At night, they handcuffed Li Xiuzhen and tied up her arms and legs. They threw her onto a wooden board such that the upper half of Li Xiuzhen's body was on the wooden board while her legs were on a chair, with nothing supporting her lower body! Criminal Wang Cheng'ai would step on her abdomen and kick her head. Li Xiuzhen frequently lost consciousness after intervals of beatings. They also tied her whole body to the bed and forced a tube into her nose and left it there.

Prison affairs section head Hu, prison head Li and team head Fang, entered her cell one day. Li Xiuzhen told them about Falun Gong. They did not listen to her and Hu said, "I will test and see how high your cultivation level is." They fetched electric batons and started to shock her. Hu shocked her on her hands, face, mouth and ears. It went on until Hu was exhausted.

Li Xiuzhen suffered cruel persecution in the prison. She could no longer walk and became emaciated. At the end of the year 2002, her weight was only a little over 20 kilograms and she was on the verge of dying. It was only then that the Jinan Prison pushed her into the hands of her family members. When her 13-year-old daughter came to prison and saw her, she was so terrified that she fainted. 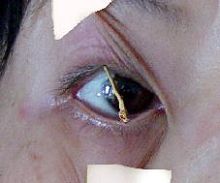 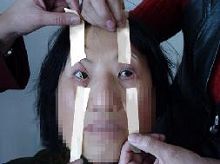 Tied to a metal chair

Forcing the tube in

3. 610 Office Brainwashing Session: Cruel force-feeding for 28 days and not allowed to sleep

Li Xiuzhen returned home from the prison for one month and had not completely recovered when CCP personnel from Anqiu came and took her to the 610 Office. Four to five men hit her in the face. Her legs were fixed to one end of the bed while her arms were handcuffed to the other end. She shouted, "Falun Dafa is good!" They punched her her mouth and force-fed her. Later, they tied her to a metal chair in the small southern room. If she fell asleep, they immediately slapped her. Li Dehe punched her causing her mouth to bleed. One night, Hu Shaoqun hit her over two hundred times and Song Tingshan forbid her to sleep.

Thereafter, Li Xiuzhen was forced to stay away from her family home to avoid the persecution. She went to the Weifang City area to work and make a living.

On the afternoon of June 13, 2009, Li Xiuzhen was once again arrested.