To mark the ten-year anniversary of the beginning of the persecution of Falun Gong in China, practitioners in Sweden went on a car tour to clarify the facts and bring an end to the Chinese Communist Party's (CCP) atrocities. The tour started on July 11, 2009, from Copenhagen, Denmark, and continued through five cities: Malm in southern Sweden, and Borgholm, Helsingborg, Goteborg, and Linkping. The practitioners' truth clarification efforts drew attention from government officials and local media and won support from local people.

Truth-Compassion-Forbearance Have Been Deeply Rooted in Sweden

On April 6, 1995, the founder of Falun Dafa, Teacher Li Hongzhi, arrived in Sweden to hold five lectures. From April 14 to 20, Teacher Li held the second and last overseas Falun Gong class at Nordgarden in Goteborg. Hundreds of people from all walks of life learned Falun Gong and truly started to cultivate.

There are now practice sites in over 30 cities all around Sweden, where Truth-Compassion-Forbearance have been deeply rooted. The majority of practitioners in Sweden are Westerners.

These practitioners, who have benefited from practicing Dafa, witnessed how the Chinese Communist Party's brutal persecution of Falun Gong that started on July 20, 1999, has resulted in more than 3,000 confirmed deaths and tens of thousands in illegal incarcerations.

Practitioners Kristina and her husband and their three lovely daughters took part in the truth clarification tour. She said, "We are visiting different cities to clarify the facts. We have gained support from Swedish government agencies, churches, and non-governmental organizations." 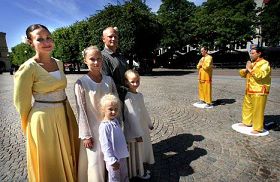 Kristina, her husband, and their daughters

Swedish MP Cecilia Wigstrm sent a letter to support the practitioners' effort. She mentioned how, twenty years ago, the totalitarian communism in Eastern Europe collapsed. "Ten years ago, the persecution of Falun Gong started. We are responsible to voice our concerns for the persecuted, and uphold Chinese people's rights. The CCP must stop the large-scale brutal persecution!" 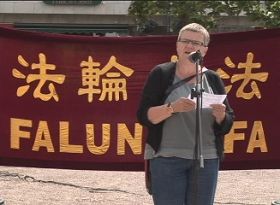 When interviewed by the media, Ms. Marinne Berg said, "I have been paying special attention to Falun Gong. Even though I do not practice myself, I know they have suffered a great deal of hardship. I regard it as my duty to come here to give a speech. I want to voice my concerns over the persecution, the harassment, even killing. As long as the Chinese regime does not respect human rights, I will fight for them (Falun Gong)." She also mentioned that Western media have failed to cover the ten years of atrocious persecution. She urged people to do what is in their power to uphold the freedom of belief and speech.

Jonas Lnn, who is in charge of the council in the City of Kalmar, was horrified to learn about the CCP's atrocity of harvesting organs from living Falun Gong practitioners. "The interest in money is so great that they can even harvest people's organs for sale. It's inhuman." 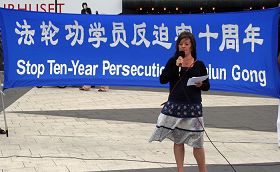 Petra Linberg, chairperson of a supporting Chinese human rights organization, has written articles urging the Swedish government to protest the CCP. She also addressed the rally in Stockholm. She said that the persecution of Falun Gong, which has lasted for ten years, has resulted in many people being incarcerated in forced labor camps where they are subjected to gross mistreat and abuse, so it is very important for people and governments in a free society to take due responsibility.