Yokohama, Japan: Practitioners Hold Rally and March to Call for an End to Ten Years of Persecution (Photos)

On July 19, 2009, Falun Gong practitioners in Japan held a rally and march in Yokohama in the afternoon, and a peaceful protest in front of the Chinese Embassy in the evening, to call for an end to the ten-year persecution by the Chinese Communist Party (CCP). They also held a candlelight vigil to mourn the practitioners in China who have lost their lives as a result of the persecution. 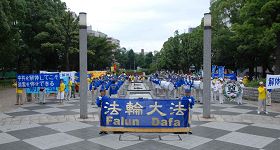 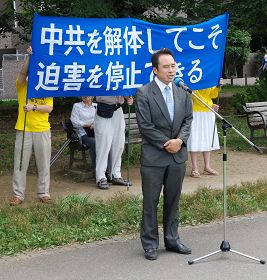 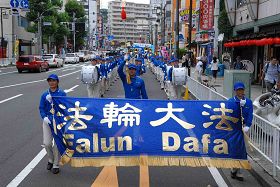 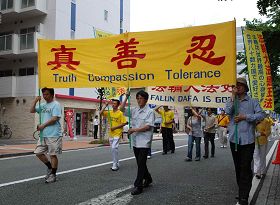 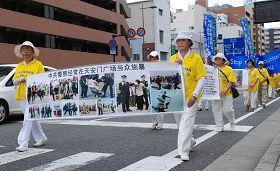 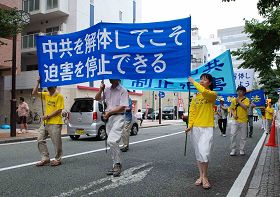 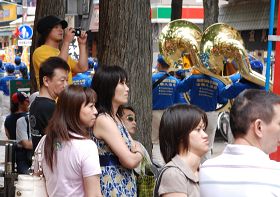 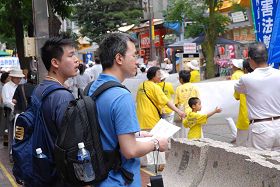 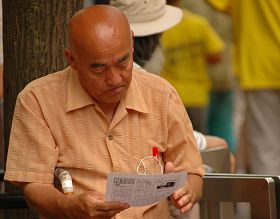 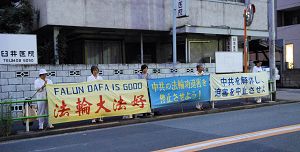 Peaceful protest in front of the Chinese Embassy 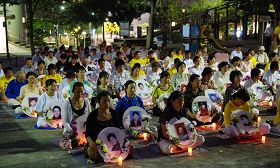 Falun Gong practitioners held a rally in a park in Yokohama at noon on July 19, 2009. Japanese human rights activist An Dong Gan addressed the rally. He said, "The CCP's brutal persecution--including live organ harvesting--of Falun Gong practitioners who cultivate Truth-Compassion-Forbearance completely goes against the universal values that respect human rights. I think that the more people in the world who believe in Truth-Compassion-Forbearance, the better. The CCP has persecuted Falun Gong for ten years, but the CCP's disintegration is inevitable. Let's call on the Japanese people to disintegrate the CCP and stop the persecution as soon as possible."

Two members of the city council sent letters to the rally. They said that the CCP suppression of Falun Gong shows the whole world how brutal the CCP really is and that it is urgent to stop the persecution.

Practitioners held a huge banner reading "Only with the Disintegration of the CCP Will the Persecution Stop," and many other banners bearing messages in both Japanese and Chinese. They also carried placards depicting torture methods that the CCP has employed against Falun Gong practitioners. The procession, composed of the Divine Land Marching Band and practitioners dressed in white carrying portraits of practitioners who have lost their lives as a result of the persecution, marched forward in downtown Yokohama.

Many people stopped to watch and inquired about Falun Gong. Some who had just come from China were shocked to see the procession and were eager to learn the true situation of Falun Gong.

As it got dark, practitioners peacefully protested in front of the Chinese Embassy and held a candlelight vigil to mourn the practitioners who have died as a result of the CCP persecution.

Mr. Mei came to Japan over two years ago. He was expelled from a university in China for practicing Falun Gong and was subjected to a five-year prison term. While in prison, he was handcuffed with his hands behind his back, deprived of sleep for long periods, beaten, and forced to read articles slandering Falun Gong. He said, "I hope the persecution can be stopped soon, because many Falun Gong practitioners are being imprisoned and subjected to gross mistreatment and abuse. If it's not stopped, I don't know how many more of them will be tortured to death or be disabled. Many practitioners I know were arrested again and went missing after having been released. I call upon governments and society as a whole to help the Falun Gong practitioners in China."

Ms. Ma, who majored in architecture, was expelled from her university and subjected to forced labor when she was in China. She told the reporter, "The persecution has persisted for ten years. How many decades make up a lifetime? Many practitioners I know are young people, and they have been deprived of the prime of their lives. We have made it through until today because we have hope in our hearts. We suffer not just for ourselves, but for the many who have not understood the deeper meaning of the persecution. Actually, the persecution affects not just practitioners, it also persecutes innocent people in society. Only by disintegrating the evil can good people live in peace."

Mr. Li was a researcher focused on high-energy physics at an institute in China. He was also subjected to forced labor when he was in China. He said, "My personal experience of the ten-year persecution makes me realize that the persecution can only make Falun Gong cultivators even more steadfast even as it reveals its evil nature to the whole world. Such an evil regime is doomed."

Japanese practitioner Mr. Moku said, "Today I recall that, when the April 25 incident took place ten years ago, the Japanese media cited China's official reports that slandered Falun Gong. I also believed it at that time, but later, I started to have doubts, as I clearly witnessed how Falun Gong reacted. So I began to re-examine Falun Gong. I changed from half believing and half suspecting to firmly believing in Falun Gong. I hope that the Japanese people will re-evaluate Falun Gong fundamentally. Only by understanding the Falun Gong issues can one truly understand the necessity of disintegrating of the CCP for the sake of the whole world."

Ms. Suzuki, who is in her 70s, has been going to the Chinese Embassy to peacefully protest on a daily basis, rain or shine, since 2001, along with several other practitioners. She said, "Practitioners are being persecuted, and this is what I should do to stop the persecution. In the past nine years, I've seen changes in people: from knowing little about Falun Gong and to being hostile and understanding little when they saw practitioners' peaceful protests, to taking the initiative to warmly greet and encourage practitioners and expressing their support for Falun Gong. I'm pleased to see people awakening." Ms. Suzuki said that as long as the CCP persecution continues, the peaceful protest in front of the Chinese Embassy will continue.