San Francisco: A Candlelight Vigil Against the Persecution (Photos)

(Clearwisdom.net) On July 18, Falun Gong practitioners in San Francisco held a candlelight vigil in front of the Chinese Consulate, in memory of those practitioners who lost their lives during the 10-year-long persecution in China. The practitioners also called for an end to the persecution. 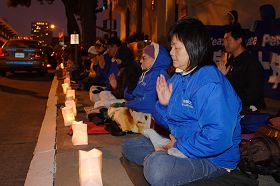 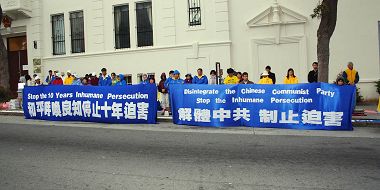 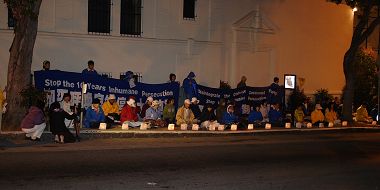 Candlelight vigil at the Chinese Consulate in San Francisco

The candlelight vigil started at 8:00 p.m. About 100 Falun Gong practitioners held banners printed with "Falun Dafa is good," "Call for Justice," and "Stop the persecution," calling upon people to pay attention to the brutal persecution taking place in China.

Mr. Peng said, "Since Falun Gong is so beneficial, it has spread to 114 countries and areas throughout the world."

Ms. Wang, a manager working in Silicon Valley, has been practicing Falun Gong for 16 years. She said that she and her whole family have benefited from Falun Gong a lot, both physically and mentally. She explained, "What we have been requesting for these ten years is for the Chinese government to stop the persecution. We hope more people will join us to end it."

Falun Gong, also known as Falun Dafa, is a traditional Chinese spiritual discipline for mind and body. The practice involves slow, gentle movements and meditation. It is easy to learn, enjoyable to practice, and free of charge. Its principles are based on Truthfulness-Compassion-Forbearance. The practice began in China in 1992 and quickly spread by word of mouth throughout China and then beyond. Today, Falun Gong is practiced by over 100 million people in over 110 countries. The main works of Falun Gong are available in over 30 languages.