Melbourne: Rally Held to Support the Grand Tide of Quitting the Communist Party in China (Photos)

(Clearwisdom.net) On June 27, 2009, a rally began with the performance of the Divine Land Marching Band at the City Square in central Melbourne, Australia. The rally was held to "Support the 56 Million Chinese People Who Have Quit the Chinese Communist Party (CCP) and Its Affiliated Organizations." The Melbourne Service Center for Quitting the CCP hosted the event, attracting numerous tourists and citizens to stop and watch. 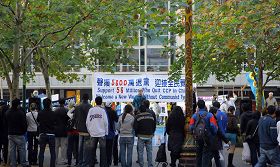 Rally held on City Square in Melbourne attracts many passersby

The quit-the-CCP rally attracted many people. Those who learned about the situation in China signed the petition supporting three withdrawals, and calling for an end to the persecution of Falun Gong.

Ms. Chen from China said, "The CCP has implanted seeds of hatred, and it's time for Chinese people to break free."

Two Chinese overseas students from Sichuan Province learned the facts and were shocked. They quit the Youth League and Young Pioneers on the spot.