A Westerner Who Promoted the Shen Yun Performances (Photos)

On March 14, 2009, the New York Shen Yun Performing Arts company went for the first time to Norway, doing two performances in the Oslo Music Hall to the audience's delight. It might have surprised some in the audience that the show could not have happened without the tireless efforts of volunteers, many of whom were Westerners promoting a show mainly focused on Eastern culture. Mr. Peder Giertsen was one of those people. We had the chance to do an interview with Mr. Giertsen in New York.

Mr. Giertsen, who is in his sixties and has run the Leap Consulting firm for almost twenty years, described the road that led him to where he is today, "In 1990, I left my previous company, and started my present undertaking of offering consultation services. I managed different sorts of projects, and earned quite a lot of money, but what about it? At the start I still thought this was important, but soon afterwards I became aware that I had not yet benefited very much from it, because to me the money did not have that much meaning, and I still did not know what I myself was actually living for. In this way, I wasted about one year of my time. I remember at that time someone asked me what my feelings were, and my answer was, 'I have ended up with nothing', that was me at that time."

Peder then went searching for his spiritual life. "Before that time, what I had pursued was money, privilege, and enjoyment; afterwards I started to travel around the world, attempting to search for answers to life's fundamental questions, to search for my true self. Every year I would go to India, to study Yoga meditation; at that time I would also teach other people to meditate, and how to attain peace of mind, but my own mind had not attained tranquillity, and one could even say I was very perplexed, because I still felt that life for me still had no meaning at all."

One day a year later, he suddenly realized that life's meaning should be to share and to give. "Before, all the teaching of meditation was to take money from people, and was not sharing with people, I suddenly realized that I should offer my services for free to people. But what method of meditation should I teach? All the previous methods that I knew of before were denied one by one, and this became a new problem for me."

"That's just what I had been looking for all my life."

This difficulty continued until one day in 1999, when Peder went out with a friend to a midday meal at a shared table, and in the course of a banquet a person was speaking about the meaning of life and Falun Gong. After seeing the videotape of the founder of Falun Gong, Mr. Li Hongzhi, a joyful Peder decided to buy this videotape. "When I was paying for it, I found that the video was cheap beyond all my expectations, whereas before the materials of this sort that I had bought were all expensive. I was aware that those who studied Falun Gong barely gathered a very low materials cost, actually it was free teaching, because one cannot evaluate the value of the most valuable things with money."

Peder immediately found the Falun Gong contact person in Norway, and started his cultivation practice. Before this, he had already practiced more than a dozen sorts of Qigong. When he just started, Mrs. Giertsen still thought that he had found just another new Qigong, and that not long afterwards he would make another fresh start. But to her surprise, even it's so hard for Peder to do meditation at the very beginning, Peder still kept on going and soon he believed, "Falun Gong is the thing I have been searching for all my life, and it is the only practice method that I should persist in cultivating in."

"When I finished reading Zhuan Falun once, Master's teaching of "Returning to one's original true self" left a very deep impression on me, people raising oneself in compliance with "Zhen, Shan, Ren" (Truth-Compassion-Forbearance), and in the end returning to the origin of one's life - this was the meaning of life that I had been searching for before but had not found. Perhaps I was a Chinese person in my previous life, as a Westerner I found it just as easy to understand the principles of this book, and I found an answer to my life's questions from it, I believed this was the truth. Moreover, in the proceeding ten years of cultivation practice, my understanding of these principles became deeper and deeper, and this righteous faith became stronger and stronger."

Following cultivation practice in Dafa, there occurred a change in Peder's attitude toward life. "I first wanted to learn tolerance. Before, people always felt sceptical on me because I was not friendly to them, often challenged them, and I always wanted to demonstrate that I was cleverer than other people. When offering consultation for other people, although I didn't provoke them purposely, but my attitude shown that I provoke them actually, estranging other people from me. After I practiced cultivation, I put effort into understanding other people, and to think about questions from their point of view, and also use it to help sincerely......the people surrounding me started to communicate with me happily, and moreover were willing to get along with me, and when I would enter a group, everyone would feel peaceful and cheerful."

"During these ten years, I have tried my best to be kind to any person in any circumstance. For instance in traffic jams, everybody on the road wants to be the first, and those trying to be first would win. But cultivation practice in Dafa has enabled me to think of others more, and I would opt for going slower and letting other people go first. It seems as if this would make me lose some time and money, but I have in fact obtained tranquility in my heart, and this for me is more important. In addition, vying to be first and struggling would also make people irrational, to let everything follow the course of nature is the best way. From now on I will still try my best, to improve myself non stop."

"For Justice, I choose to stand up"

In July 1999, the persecution of Falun Gong by the Chinese Communist Party (CCP) began. When Peder came to know of this news, he was shocked. Based on his first-hand experiences, Peder firmly believed that the CCP was wrong.

"However my cultural background made me get used to remaining silent, when the question of whether I should demonstrate in the streets, or hold some public activities to stop the persecution came up, I still had a reserved attitude. One of the principal reasons for this was that I was a member of the middle class, and I had always received the respect of others, and I had never demonstrated in the streets for any reason. I didn't know what my friends would think of me when they saw me doing these things. Another reason was that, at that time I still hadn't realized that [standing up for Dafa] wasn't demonstrating in the streets and getting involved in politics, because the principles of Dafa cultivation practice was that we couldn't get involved in politics."

"I was born in 1943 during the second world war, and my father was a doctor. I still faintly remember that in those days when our door was knocked on and it was open, those who came in were all the wounded, and my father hid them in the house to hide from the German army tracking them down. Later, my father was also thrown into prison. At that time many Norwegians risked danger to cross the border, to help the Swedish fight against the German invaders. I think I inherited my moral character from my father."

After much thought, Peder stepped forward and joined the first demonstration against the persecution of Falun Gong held in the centre of Oslo. 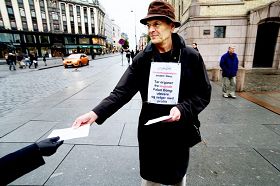 In the nine years since then, Peder and fellow practitioners held peaceful protests, did the exercises in front of the CCP's embassy in Norway, held news conferences in front of Parliament, joined anti-torture exhibits, put up informational exhibits in downtown, and went to other countries to clarify the truth.

"We can be seen anywhere in the world, we try our best to use various channels to tell people the true situation, hoping that kind people will stand on the side of justice after they come to know the truth. We will persist all the way to the end of the persecution."

Three years ago, Peder watched and was moved by the first Shen Yun performance at Radio City Music Hall in New York. After seeing how the artists connected people with their kind nature that has been sealed and covered with dust, Peder and his fellow practitioners were determined to have the Shen Yun performance come to Norway.

Their tireless efforts turned this into a reality at a packed Oslo Concert Hall. During the performance, the audience warmly applauded the performers repeated and gave standing ovations at the end of the shows. It was indeed a spectacular sight and hugely gratifying for Peder and the other volunteers that helped to put on the show. 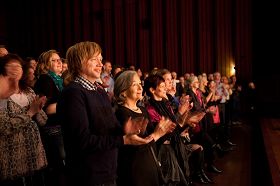 Standing ovation from the audience after one of the shows

Mr. Terian, international business affairs executive, said about the performance: "The stage was full of radiance, the costumes which are too beautiful to absorb, and the amazing dance......everything was just wonderful. Every minute, every second of the Shen Yun performance we loved too much to part with."

Banker Mr. Andersen said : "Its artistic quality is high, and its inner meaning is vast, which is very unusual! Every item left a deep impression on me, and shook me deep down."

Ice skating coach and choreographer Sigfried said in admiration: "The Shen Yun dance originates from the artists' beings, and it can move people's spirit."

Ms. Alba, an office manager, said, "I have been searching for this all my life!"

Well-known human rights lawyer from Norway Mr. Braugher said that Shen Yun was "a great and outstanding performance, I am very grateful that Shen Yun could come to Oslo."