Details of the Death Due to Persecution of Ms. Su Yanhua from Jiamusi City, Heilongjiang Province (Photo)

Falun Gong practitioner Ms. Su Yanhua from Lianjiangkou, Jiamusi City, Heilongjiang Province was illegally arrested several times and detained for her belief in Truthfulness-Compassion-Forbearance. While incarcerated at the Jiamusi Labor Camp, she refused to give up Falun Gong. The guards savagely beat her, force-fed her, tortured her with the "Death Bed" and the "Big Hang-up", and shocked her with high-voltage electric batons. They forced her to sit on stools with spikes on them, which caused severe and irreversible injuries. She died at 8:00 p.m. on May 4, 2009 as a result. 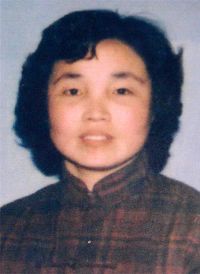 Local police arrested her again, this time on April 15, 2002, as she visited her brother. She was locked up in solitary confinement, and subsequently the local authorities sent her to the Jiamusi Labor Camp on April 27, 2002.

Ms. Su was subjected to various types of torture and brainwashing. The guards forced her to sit on a stool in July 2002 and watch propaganda videos. She refused to watch them, so a guard dragged her down the staircase into a room and handcuffed her to a bed. When she went on a hunger strike to protest, the guards force-fed her milk with lots of salt in it for seven days.

Guard He Qiang went to Beijing right before October 23, 2002 to study brainwashing methods. He applied those methods on the detained practitioners after he returned. The labor camp officials launched another round of brainwashing and torture on October 26, 2002.

The guards formed an "Attack the Fort" division. Wang Xiurong and Zhang Yan, heads of Division 8, and guard Cheng Senhui and others repeatedly assaulted the practitioners with wooden clubs and electric batons.

The practitioners got up at 5:00 a.m., and they were given ten minutes to wash their faces, brush their teeth and use the restroom. The practitioners were forbidden to talk to each other and were physically assaulted if the guards caught them conversing. Then, the practitioners were taken to an appointed room to watch slanderous videos. The practitioners sat on a stool that is in fact a torture tool (see photo illustration at http://www.clearwisdom.net/emh/articles/2003/10/29/41751.html) between 7:20 a.m. and 11:00 p.m. and sometimes past midnight.

The officials gathered determined practitioners on the west side of the third floor one day in November 2002. They forced the practitioners to sit on the torture stools with their hands on their knees. Each practitioner was given a tiny space and had to sit for more than 13 hours. Some practitioners' buttocks bled. Dried blood stuck to the fabric and flesh, causing severe pain upon the slight movements. Several male guards who watched the practitioners held electric batons. They told Su Yanhua to read from a slanderous pamphlet in a loud voice. She refused. Two guards dragged her into another room and smashed her with their batons. They kept striking her torso and legs. She rolled on the floor in terrible agony. Her legs swelled up and she could not lift them, so she dragged them as she walked. She did not recover for a long time.

Ms. Su refused to write guarantee statements and was locked in a room on the west wing of the second floor. They would not let her leave the room. Ms. Su and Li Xiaohong refused to watch the video or eat. Guard Chen Jing handcuffed Ms. Su, one hand above the other to a bed, so that the practitioner could not move while being locked in this position. Her arms were extremely sore. She was dizzy when the handcuffs were removed two weeks later, could barely stand, and her limbs were weak.

Many practitioners developed scabies in February 2003 due to the terrible filth in the cells. Ms. Su's condition was especially dreadful. She itched so severely that she could not sleep at night. The labor camp doctor made a spray for the practitioners. After using it for a few days, the practitioners' condition worsened. They lost control over their limbs. Continued use of this drug made the practitioners' condition so serious that they could not raise their heads. They also experienced chest pain and could not lift their hand when eating. Ms. Su's symptoms began only after using that spray. The guards tried to silence her and said that she was making up the symptoms.

Everyone went to the drilling ground to do the labor camp exercises one morning in late May 2003. Ms. Su began doing the Falun Gong exercises. Guards Chen Chunmei and Gao Jie and several inmates dragged her into the stairwell and savagely attacked her. Guard Wang Xiurong not only beat her but handcuffed her afterwards and attempted to coerce her to write a statement saying she would never again do the Falun Gong exercises. She refused and was taken aside, along with another practitioner. They were handcuffed to bed poles and were tied with ropes from chest to waist so tightly that they nearly suffocated. Their legs were tied to the foot of the bed. They each laid on wooden boards about 25 cm wide, each board about 15 cm apart. They were tied this way for about one week. Su Yanhua was later taken to the west side of the second floor, handcuffed and tossed on the ground.

That was a very cold day. Ms. Su was left on the freezing tiles wearing only thin clothes. She was handcuffed behind her back during the day and handcuffed in the front at night. She could barely sleep, and had lower back and abdominal pain from the cold. One day, she sat on her shoes to protect herself from the cold tiles. A guard walking in saw this and screamed at the inmate assigned to watch her.

Su Yanhua was handcuffed while on the west end of the second floor for nine days. On the tenth day, guards Li Xiujin and Liu Yadong took her to the east side of the second floor and attempted to coerce her to write a statement promising "to abide by labor camp rules and regulations." Su Yanhua said, "I never violated any rule or regulation, so I won't write anything." They began torturing her. One of the torture methods was the "Big Hang Up." After they had handcuffed her hands behind her back, they pushed her arms against the bed boards to make sure that she could not bring her arms to the front from over her head. The Big Hang Up torture lasted an entire afternoon. She was in agony and vomited blood. The inmates reported her condition to guard Li Xiujin. The handcuffs were finally removed in the evening. Ms. Su never wrote any guarantee statement, but guard Li Xiujin wrote the statement on Su Yanhua's behalf and told her not to tell anyone. They handcuffed her for a total of 13 days. She no longer had full mobility of her hands and could barely walk once the handcuffs were removed. It took a few days before she partially recovered, but she still needed assistance to walk.

Ms. Su was doing the exercises in June 2003. Guards Li Xiujin and Liu Yadong again handcuffed her and left her on the floor. They again attempted to coerce her to write guarantee statements. One inmate secretly gave her a pair of pants so that she could insulate herself against the icy floor. Guard Liu Yadong saw it the next day and savagely beat the inmate. They took Ms. Su to an empty room. Guards Liu Yadong and Li Xiujin slapped her face until she lost consciousness. They then dug at her philtrum with spoons when she refused to speak. When they were exhausted, they told inmates to hit her philtrum. The inmates could not bring themselves to do it, and the guards cursed at the inmates and made them use their nails instead--they scratched the skin off her philtrum, (the space between the upper lip and base of the nose, also called the vermilion).

Ms. Su refused to do the labor camp exercises on September 1, 2003. Division head Wang Xiurong pulled her aside, and punched and kicked her. Su Yanhua asked her, "Why are you hitting me?" Wang Xiurong said, "That's exactly what I'm doing! Jiang Zemin told me to do this." She slapped Su Yanhua's face two more times.

The detainees were marching to the cafeteria at noon on February 11, 2004 when guard Chen Chunmei claimed detainees in Group 8 did not shout the required slogans loudly enough. She said through clenched teeth, "Why don't all of you just die?" The practitioners who refused to shout the slogans were deprived of food. In the evening, practitioners who refused to recite the labor camp policies were forced to stand. Guard Hong Wei barbarically kicked Ma Rujuan in her lower back area three times, which caused sharp, stabbing pain that lasted for a long time. Guard Li Xiujin from Group 9 said Su Yanhua was not shouting slogans on the way back to the cells in the evening of February 12, 2004. She dragged Su Yanhua out and beat her. A few other practitioners tried to stop the assault. The abusers beat practitioners Zhen Yingchun and Kang Aimin. The beating left her unable to walk.

In March 2005, Division Head Liu Yadong at the Jiamusi City Labor Camp in Xigemu declared that the Falun Gong practitioners refused to do the homework she assigned them. More than 30 guards from Group 7 and Group 8 of Division 7, more than 20 inmates, and male guards from the male division and the Surveillance Section were mobilized to attack the practitioners on two floors of the building. They used electric batons, police batons, handcuffs and other tools and dragged the practitioners into rooms one by one and handcuffed them to beds. They tortured practitioners who still refused to do weekly "homework", shocking them with electric batons, beating them with police batons and kicking them with their hard boots. More than 20 practitioners were severely bruised.

Liu Yadong hit Su Yanhua twice on the head with police batons, and she lost consciousness. When she came to, they pushed her into a metal chair, and she went on a hunger strike to protest the abuse.

Practitioner Yu Chunmei was held beyond her original term. They shocked and beat her until her mouth was covered with huge blisters. She was locked in solitary confinement and handcuffed to a bed. Zhang Chunzhi was beaten so severely that she could no longer walk. Gao Cuilan was beaten until blood came out of her ear. Bao Lixia was handcuffed to a bed while the guards kicked her face with their hard boots, making her lips swell up and deforming her face, severely bruising her. The guards claimed that the practitioners walked too slowly on their way to the cafeteria, and guard Zhou Jia made the practitioners to stand outside in the sweltering heat.

Several days later, the guards handcuffed Su Yanhua to a bed. They removed all the bed boards, except for one. It was less than one foot wide, so she was made to lie on that single board with both hands cuffed on the bed and could not move, or she would fall to the floor. It was dark and damp in the room, and Ms. Su started growing scabies in 2003. Camp clinic officials compelled her to use a highly toxic self-made medication, which resulted in her becoming unconscious, and she developed a stiff tongue and legs. Clinic doctor Song said, "Why didn't you tell us you had all these symptoms? This drug is for scabies. If it doesn't work for you, then go to a hospital!" Even then she had no feeling in her legs. The guards struck her and made her lose consciousness on March 2, 2003, and her head was covered with blisters.

Su Yanhua has died as a result of gross abuse and torture, and another family has been shattered. Many practitioners in China have suffered similar abuse, mistreatment and torture under the persecution, and many more are still being held in labor camps, prisons and detention centers.