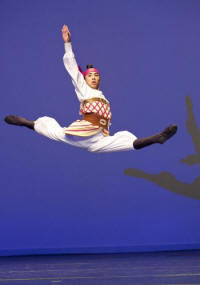 On Saturday, a select few will enter the semi-finals, and the finals will be held on Sunday. The contestants will be displaying their knowledge of traditional Chinese dance before a panel of six judges, all graduates of the top dance schools in China and Taiwan.

Since most entrants are on a similar skill level, the emphasis in this year's contest will be on performance, rather than technical skill, according to judge Yungchia Chen. "They are all technically advanced, so we will see how steady their movements are, and who adapts on the stage the best," he said.

Judge Vina Lee also stresses this point, and adds, "In the case that contestants can fully display the movements, and when they meet the requirements, they will be judged on their steadiness, the cleanness of movements, and their sense of music. There will be a lot of artistic competition."
Chinese Dance Briefing

With 5,000 years of history, the scope of Chinese classical dance is broad and profound. Dancers can portray a variety of characters through this form of dance. The flips, spins, and tumbling techniques of Chinese dance render the dance more complex and expressive than any other dance form.

A defining characteristic of classical Chinese dance is its ability to convey a character's internal landscape and storyline. Through their movements, dancers are able to express the spirit of what they are portraying--this is called "bearing." Eyes, hands, form, and step, along with spirit, strength, and rhythm, are some key components in Chinese dance.

For example, the adult male division's Golden Li performed a piece titled "Courage." In this dance, he depicts a soldier who is injured in battle, and returns to the battle to continue fighting. Contestant Gary Liu's dance, "Traveling in the Tao," also expresses the strong will of the main character--a Taoist cultivator. "While dancing I thought of a cultivator continuing in the toughest of circumstances," Liu said. "I aimed to express that feeling [of determination]." 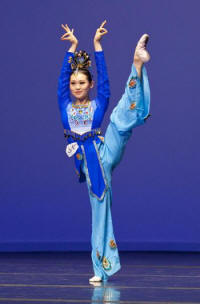 Jennifer Su's dance 'Fairy of the Phoenix' (Edward Dai/The Epoch Times) The adult female division's Jennifer Su performed a piece she calls "Fairy of the Phoenix." She explains: "The phoenix in ancient China is a very sacred mystical bird. It is at once noble yet carefree, as it lives in the air." To display that takes a nuanced and careful study of classical Chinese dance.
On to the Semi-Finals

To the contestants who will be continuing on to the semi-finals, Chen Yungchia offers the following advice: "On stage, nothing beats a calm and steady psyche. A lot of contestants are actually very skilled, but appear shaky, touch the ground, or slip, that's because they get nervous."

Per contest regulations, they must each perform a short piece to self-selected music and another containing a set of required dance techniques, consisting of leaps, turns, flip, and control, plus tumbling techniques.

Tickets for the dance competition and any of NTDTV's other eight competitions are available at http://competitions.ntdtv.com/ticket