On May 27, 2009, MPs Scott Reid and Irwin Cotler and other MPs from four major parties hosted a China Human Rights Forum in the Canadian Parliament. More than ten MPs and senators, dozens of reporters, and non-government organization representatives attended the forum. Six experts and witnesses talked about human rights violations in China from different angles.

The witnesses and experts gave speeches on how Chinese prison products affect the Canadian people, the effect of China's large-scale human rights violations on Canadian families, the CCP's harvesting of organs from living Falun Gong practitioners, and China's Internet censorship. 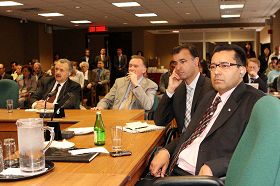 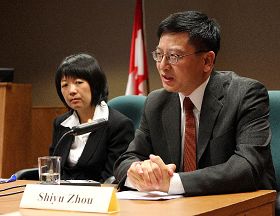 Mr. Shiyu Zhou, the Deputy Director of the Global Internet Freedom Consortium, pointed out, "The Chinese authorities started Internet censorship as soon as the Internet became popular. The battle over the Internet has intensified since 1999 after the suppression of Falun Gong started." 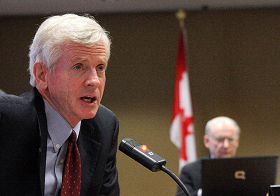 Mr. David Kilgour said, "In China, only Falun Gong inmates in the camps are used as a live organ bank to be pillaged for sales to foreigners." 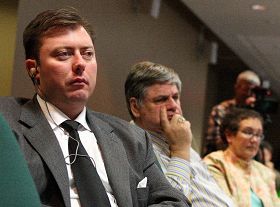 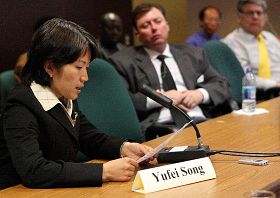 Mr. Kilgour, a former MP and Secretary of State for Asia Pacific, said in his speech, "As we approach the 20th anniversary of the Tiananmen Massacre and 10 full years since the merciless persecution of Falun Gong began, I feel compelled to use my limited time today on these issues, despite those who say any criticism of China's party-state should be muted during the present world economic crisis."

After reviewing the CCP's Tiananmen Massacre twenty years ago, Mr. Kilgour said, "To divert the ensuing international outcry and re-assert its claim to legitimacy, which was effectively nullified worldwide by the massacre, the Party turned its attention towards economic growth. In short order, China was refashioned into the world's factory, churning out low-cost, often unsafe, consumer items made by women and men enjoying minimal work safety and virtually no social programs, pensions or environmental standards. This included prisoners of conscience who toil without any pay in forced labor camps."

He continued, "Forced labor as a consequence of human trafficking is all too common in many parts of the world today, but only the party-state of China uses it to punish and suppress Chinese citizens for political dissent or religious beliefs. Any Chinese national can be sent to a camp without any form of trial for up to four years upon committal by a simple police signature.

"Since the 1950s, a vast network of labor camps has existed. In the estimated 340 camps across China as of 2005, up to 300,000 'workers' toil in inhuman conditions for up to sixteen hours daily without pay, producing a wide range of consumer products, mostly for export in violation of World Trade Organization rules."

Practitioner Yufei Song told about her suffering in a forced labor camp: "I was forced to do hard labor, including packaging disposable chopsticks, making Motorola V70 mobile phone promotion brochures, and making candles for export to Germany. I was forced to get up at 6 a.m. and work until 10 p.m. All those under 55 years old were forced to wrap over 7000 pairs of chopsticks and those over 55 were forced to wrap over 5000 pairs of chopsticks each day. Some old ladies working slowly would be forced to continue till midnight or 1:00 a.m. till it was done.

"Fifty days later I was taken to the Beijing Women's Forced Labor Camp. About seven hundred Falun Gong practitioners were being held there--they took about 80 percent of the total detainees there."

Mr. Kilgour said, "In China, only Falun Gong inmates in the camps are used as a live organ bank to be pillaged for sales to foreigners. Medical testing is required before organs can be matched with recipients, but only Falun Gong prisoners in the camp populations are tested medically on a regular basis."

Mr. Matas, the other author of the investigation report on the CCP's live organ harvesting, said at the forum, "Once the practice of Falun Gong was banned in 1999, hundreds of thousands of Falun Gong practitioners travelled to Beijing to protest or to unfurl banners calling for the group's legalization. People came almost daily. By the end of April 2001 there had been approximately 830,000 arrests in Beijing of Falun Gong adherents who had been identified. The extremely large group of people subject to the exercise of the whims and power of the state, without recourse to any form of protection of their rights, provides a potential source for organ harvesting of the unwilling."

Michelle Zhang spoke at the forum by telling how her family in China, almost all of whom practiced Falun Gong, endured ongoing persecution. "I never imagined that I would lose three of my most beloved family members within a few years," she said. Shortly after Falun Gong was banned in China in 1999, Ms. Zhang's brother-in-law, Songtao Zou, was detained for appealing to the Beijing Central Petition Office for his constitutional right to practice the spiritual discipline. His daughter was born while he was imprisoned. Though eventually released, he was detained twice more and died in prison in November 2000. Without asking the family's permission, prison authorities cremated Songtao's body.

Ms. Zhang's mother died as a result of torture, while her sister disappeared after being arrested. Police denied detaining Ms. Zhang's sister and Ms. Zhang is now almost certain her sister is one of the 46,000 Falun Gong practitioners believed to have been killed for their organs.
A challenge to human morality

Mr. Wenyu Liu, a PhD student at the University of Calgary, graduated from Tsinghua University in Beijing. He said, "It is painful to recall the persecution I suffered in China. For the three years that I was jailed, the police repeatedly beat me, shocked me with electric batons, and threatened to kill me. When being shocked, my heart froze and the smell of burning flesh filled the room. The feeling was something I never want to recall. They also deprived me of sleep for many nights in order to break my will."

Mr. Shiyu Zhou, the Deputy Director of Global Internet Freedom Consortium, pointed out, "The Chinese authorities started Internet censorship as soon as the Internet became popular. The battle over the Internet has intensified since 1999 after the suppression of Falun Gong started." "The CCP regime co-opted North American companies such as Cisco and Nortel to create an Internet that is fully censored and monitored."

Ms. Song said, "In December 2001 I posted on the Beijing University Internet Bulletin Board System an article revealing that the self-immolation incident was a set up by the government to frame Falun Gong. Since China's Bulletin Board Systems were under the control of the regime, Chinese police found out my IP address with the Internet surveillance system and arrested me on the morning of December 25, 2001."

Mr. Liu stated, "After almost one year of abuse and detention, the Beijing Intermediate Court subjected six Falun Gong practitioners, including my wife and me, to a show trial. We were accused of downloading information about Falun Gong from the Internet and spreading it and hanging up Falun Gong banners. At the end of the show trial, my wife was sentenced to twelve years in prison, and I was sentenced to three years. Other fellow practitioners were sentenced to 11, 10, 9 and 5 years. Amnesty International reported on this case in 2002."

Commerce at the cost of human rights is inappropriate

MP Scott Reid, the host of the event, said the fact that China's communist regime was making money from persecuting Falun Gong practitioners was especially disturbing, "The worst forms of human rights abuses are those which are economically sustainable. Abusing human rights on a mass scale is an immense proposition. It requires a lot of money and vast resources and therefore it can only be perpetuated in the long term when it becomes self-financing. That was certainly the key of the SS system that was used to exploit and profitably destroy the Jewish population."

Mr. Kilgour said in his conclusion, "As the world experiences the economic crisis and seeks China's cooperation in dealing with its challenges, it is tempting to overlook Beijing's human rights record. We must remind our leaders that to equivocate on China's record here is a departure from Canada's own values of human dignity and rule of law. We must caution them that trade with China at any price is costly both for the people of China and the people of the world. We must remember the sacrifices of victims of the massacre and other abuses. We must demand that, instead of mocking the Universal Declaration of Human Rights, China should honor its provisions."