(Clearwisdom.net) Mr. Ji Baoshan, a Falun Dafa practitioner from Fangzheng County, Heilongjiang Province, was" illegally arrested" more than three months ago. At the time of his arrest, his wife was forced to beg for food to care for their two-month-old baby. She wrote her story on a piece of yellow cloth, explaining how her husband was arrested for practicing Falun Gong and being a good person, how their home was ransacked, and how they lost their only source of income. She was calling for help. 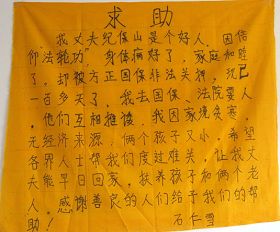 The Domestic Security Division of Fangzheng County has been following the Chinese Communist Party's (CCP) order to persecute Falun Gong since July 1999. More than 100 local practitioners have been arrested, fined, sent to forced labor camps, or jailed. At noon on January 11, 2009, they arrested Mr. Ji in this remote countryside.

At noon on January 11, 2009, two police cars went to Mr. Ji's home. He had just returned from gathering firewood on the mountain when the police put him in handcuffs and foot shackles. Those who ransacked Mr. Ji's home included: Zhao Jiaqi and Yu Guangsheng, the assistant chiefs of Fangzheng County Police Station; Lu Tongjin, director of Domestic Security Division of Fangzheng County; Bai Wenjie, assistant director; and policeman Wang Linchun. Wang Linchun entered the house first to begin the search. They took at least one computer, two printers, a satellite dish, a role of wire, three cell phones, two stereos, and Dafa books.

Mr. Ji's son was so frightened by the crude behavior of the police the day his father was arrested that he started to shriek. Since then, the little boy has been scared of all unknown people. Some neighbors heard the noise and wanted to check on the child. The police refused to let them in and cursed at them. They did not show Mrs. Ji what they took, nor did they have her sign any documents.

After three hours, the police were about to leave. When Mrs. Ji tried to stop them from taking her husband, Wang Linchun held her arms. Mr. Ji told them, "What you are doing is illegal. You are breaking the law yourselves."

Mr. Ji's family relied on his temporary work as their only source of income. In their home, there was nothing of any value besides the computer and printers, which the police took. After Mr. Ji's arrest, his wife was forced to place the boy in a relative's home. She took their daughter with her to the police station in the cold winter, demanding her husband's release.

On January 13, Mrs. Ji went to Fangzheng County Police Station. About a week later, after fruitless efforts to get her husband released, Lu Tongjin, the director of the Domestic Security Division of Fangzheng County, who initially refused to meet with her, agreed to meet her under the condition that she would "help" them "transform" her husband, that is, make him quit practicing Falun Dafa. Lu told Mr. Ji that he could be with his family again if he gave up his belief. He had expected that when Mr. Ji saw how badly his family was doing without him, he would stop practicing. Mr. Ji, however, knew he had done nothing wrong and refused to comply with Lu's demands.

Another week passed and the Chinese New Year was approaching. The police were afraid of having their reputation damaged so they took Mr. Ji's wife and daughter home. They knew that arresting Mr. Ji was illegal.

Mr. Ji's wife returned home and discovered the house was cold and in total disarray due to the police's ransacking. Their son had never been apart from his parents before and he had been crying for days, asking for his daddy and mommy. He often cried himself to sleep. He refused to eat and became pale. The police's actions left a big shadow on his young heart. The boy would cry as soon as he saw an unfamiliar face. He referred to his uncle, who was helping to take care of him, as "Daddy" and refused to let him go to work. When his mother returned, he held her tightly for a long time.

Mr. Ji's elderly parents were not in very good health. They had no personal income and lived on selling chicken and goose eggs. Their chickens and geese were stolen and it put them in an extremely difficult situation. Now, with their son's arrest, they could not depend on him for any help.

Mr. Ji and his wife are nice people and well-liked by others in the village. Their neighbors sympathized with Mr. Ji's family and tried to help them by inviting them to spend New Year's at their homes and by giving them firewood.

Since January 29, Mrs. Ji has continued to ask the police to release her husband but they are willing to help her. The police officers said he would not be released until he promised not to practice Falun Dafa. Policeman Wang Linchun told her, "Go get a divorce and marry someone else." She went to talk to Han Tiezheng, the chief of the police station, and Han even said, "Don't ask me, go ask your Teacher." She went to Zhao Jiaqi, the assistant chief. Zhao found an excuse to leave. Later, Mrs. Ji went to the court. The court police told her, "Go home and wait. It will take three to five years." Mrs. Ji also went to the county government and the local 610 Office. Du Juntang of the Political and Judiciary Committee told her to go home to wait and not to carry the child around.

Forced to Beg and Then Threatened by Police

When Lu Tongjin, Bai Wenjie, and Wang Linchun of the police station saw Mrs. Ji on the street begging for help, they asked her to come to the police station. Mrs. Ji thought they were going to solve the problem. She did not expect Lu Tongjin to threaten her. He said, "Put her child somewhere else and arrest her." Later, police officers Bai Wenjie and Wang Linchun took her home by force. They refused to return the yellow cloth that Mrs. Jin wrote her message on.

Several days later, in an effort to secure her husband's release, Mrs. Ji returned to Fangzheng County. Every day she begged for help on the street while carrying their young daughter. Many people learned what happened and offered their sympathy.

One day, Bai Wenjie went to Mrs. Ji and forced her to leave by threatening her: "Come with me to the police station. I am arresting you!" Mrs. Ji said, "You have persecuted us so intensely that I had to beg on the street. Don't I have a right to beg at least? You say 'harmonious society' all the time. Is this a harmonious society?" Bai Wenjie and another police officer (license numbers 026227 and 026241, respectively) and a traffic police officer took Mrs. Ji's yellow cloth which had "help" written on it. Bai videotaped Mrs. Ji against her will.

During the times when Mrs. Ji was on the street, plainclothed police officers watched her all the time. Even the traffic police often harassed her.

Currently, Mr. Ji Baoshan is being illegally detained in the Fangzheng County First Detention Center. His wife is still begging on the street. We call on the international community to help Mr. Ji's family and help end the persecution.