(Clearwisdom.net) Shen Yun Performing Arts debuted its Spring Tour at the Pasadena Civic Auditorium to an enthusiastic audience on Friday evening, May 8, 2009.

Mr. Rush Robinson, a professional musician, and his wife were among the enthusiastic audience on Friday evening; Mr. Robinson was full of praise for the music composition. "I appreciate the music and the instrumentation and the orchestra. The music composition is very, very nice. Believe me, as a musician I know how good it is. Most people wouldn't understand the combination of violins and instruments with strings and horns. But the composer has done an excellent job in making the music the best it could [be]. My compliments to the composer."

Mr. Robinson was also impressed with the technical aspects of the show, saying the sound was very clear. "We could hear perfectly. So everyone is doing a great job. I love it."

Mrs. Robinson found the show very entertaining and thought the performers were beautiful, saying, "It's very elegant. Very well done. Very precise ... it is a beautiful, cultural event. Beautifully done." She also said she felt it was "very classic" and that the colors were beautiful, and she was particularly impressed by the soloists, saying they were "wonderful." "The lady who sang--she has a tremendous, beautiful voice. And also this lady who was a virtuoso [erhu player]. Those two ladies really impressed me the utmost," she said.

Mr. Wagner, a musician who recently moved to Los Angeles, was impressed with Shen Yun and enthusiastic in his response, saying, "It was awesome. It was great. It was fantastic." 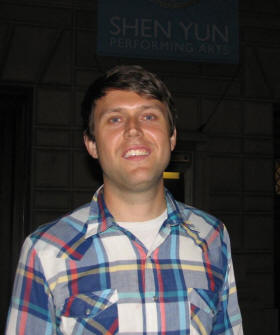 He enjoyed the combination of Western and Eastern instruments and appreciated the fact that the orchestra was live. "It added a whole new energy, a whole new vibration to the room," he said enthusiastically. A unique attribute of the show is the Shen Yun Performing Arts Orchestra, which uses a classical Western orchestra as its foundation and augments it with traditional Chinese instruments such as the pipa (Chinese lute), souna (Chinese oboe), dizi (flute), and gong.

Mr. Wagner, who plays the bass guitar, admitted that most of what he hears about China is "the totalitarian dictatorship, the civil rights violations, and the horrible pollution." "I hate what's going on right now," he said.

He was surprised to learn about the different ethnic groups in China and delighted to learn of China's rich history. "I honestly never knew how rich and diverse and beautiful Chinese culture is," he said.

Mrs. Hawks attended the show with her husband, a former music teacher. They both thoroughly enjoyed listening to the Chinese instruments. Mrs. Hawks said, "They're very good musicians. I particularly liked the violin [erhu] solo." 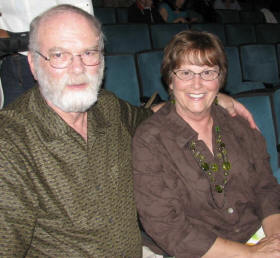 Mrs. Hawks attended the show with her husband, a former music teacher.

Mr. Hawks, a clarinet and saxophone player, agreed, "The erhu solo was awesome. I loved the Chinese flute."

One of Shen Yun's trademarks is story-based dances that give dramatic portrayal to ancient Chinese myths and legends as well as significant events unfolding in China today. One such story shows the father of a young girl being persecuted in China for his belief in the spiritual practice of Falun Gong, which has been persecuted by the communist regime since 1999.

Mr. and Mrs. Hawk were intrigued by this piece. "We were aware of the persecution. It was interesting to see that come out in the show. I think the Chinese people have been given a real line on that. I really don't totally understand the [Chinese] government's fear of the movement. It [Falun Gong] is very peaceful," Mrs. Hawk said.