Belgium: Falun Dafa Practitioners in Brussels Call for an End to the Persecution at April 25 Activity (Photos)

On April 24, 2009, Belgian Falun Gong practitioners held an activity in front of the Chinese Embassy in Brussels to commemorate the tenth anniversary of the large-scale peaceful appeal in Beijing. Meanwhile, they protested the ten-year-long persecution of Falun Gong and called for an end to the persecution. 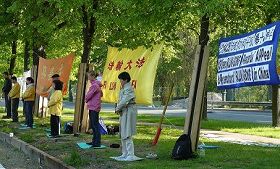 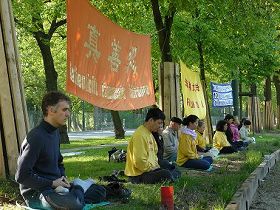 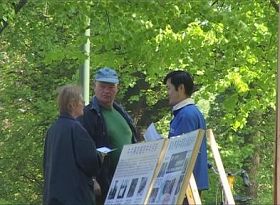 A German couple learn about the persecution.A German couple got off their bikes and walked up to the banners to see them. When they learned how Falun Gong practitioners were persecuted in China, they showed their sympathy immediately, and understood how the CCP suppresses people's beliefs and traditional culture.

Ms. Noel, who lives nearby, saw people meditating and parked her car to find out more about the situation. She said, "Through the introduction of Falun Gong practitioners, I learned this is a cultivation practice based on the principles of Truthfulness, Compassion and Forbearance. I feel that this is very important to everyone, it is very important to the whole of society as well.

"We know that under the control of a dictator, there is no freedom of thought, and they don't allow people to follow such principles. But more and more people in the world have this freedom."