On April 25, 2009, the Mid-US Falun Gong practitioners held a march and rally in front of the Chinese Consulate in Chicago to commemorate the tenth anniversary of the "April 25th" peaceful appeal, clarify the facts, and stop the persecution. 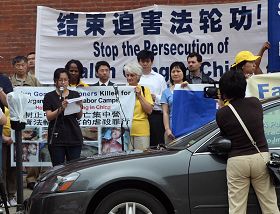 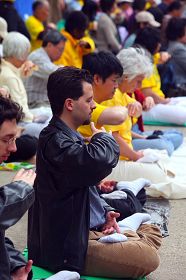 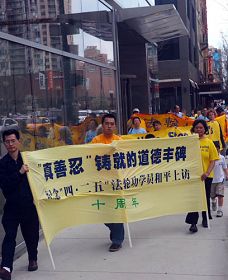 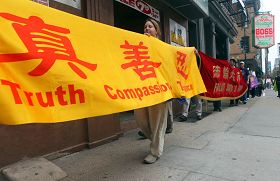 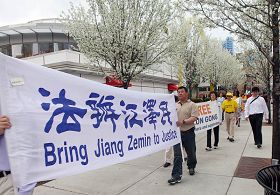 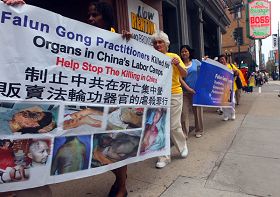 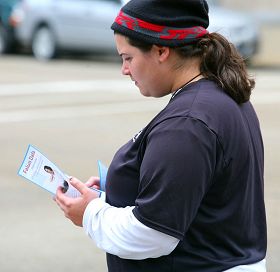 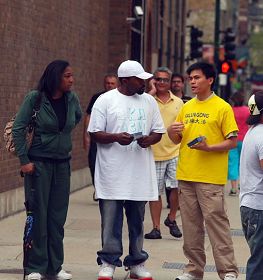 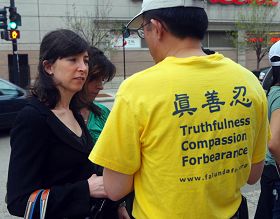 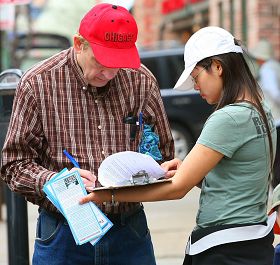 On April 25, 1999, more than ten thousand Falun Gong practitioners peacefully gathered in front of the State Council Appeals Office in Beijing. They requested the immediate release of dozens of Falun Gong practitioners who were illegally detained by the Tianjin police, to have a legal and free environment for practice, and to lift the ban on the publication of Falun Gong books. The practitioners' peacefulness and rationality, as well as the discipline and high moral conduct manifested during the appeal, impressed the whole world. On July 20 of the same year, Jiang's regime launched a frenzied suppression of Falun Gong. The "April 25th" peaceful appeal was officially defamed by the CCP as "besieging Zhongnanhai." It can be said that the "April 25th" peaceful appeal in 1999 pushed Falun Gong onto the world's stage. Since that day, Falun Gong practitioners from around the world have resisted the persecution by exposing the CCP's lies and slanders and allowing more people to learn the facts about Falun Gong.

In front of the Chinese Consulate in Chicago, practitioners held banners reading "A Moral Monument Built by Truthfulness-Compassion-Forbearance--Commemorating the 10th Anniversary of the 'April 25th' Peaceful Appeal," and "Stop the Persecution of Falun Gong." Practitioners who had personally attended the "April 25th" appeal recounted what they had experienced:

Xu Yan: Stepping forward to work together to stop the persecution 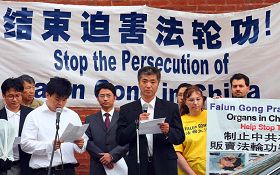 Associate Professor Mr. Xu Yan was the first to speak at the rally. Dr. Xu and his entire family fled to the United Stated to escape the CCP's monitoring in 2008. He had been subjected to brutal torture when he was illegally detained in Beijing's Tuanhe Forced Labor Camp.

Ten years ago, Dr. Xu was an excellent educator with over ten years of teaching experience and enjoyed a peaceful life with his family of three.

In the past ten years, for remaining steadfast in his belief in Truthfulness-Compassion-Forbearance, he was harassed, monitored, and even illegally subjected to forced labor. He experienced brutal torture in the infamous Tuanhe Forced Labor Camp. He was even forced to make products that the CCP used to wrap gifts during the Olympics. Dr. Xu said, "This was an insult that the CCP offered to the international community."

Dr. Xu stood in front of the Chinese Consulate and said, "I'm grateful to kind and righteous people for their unselfish help, and I'm grateful for the US government's understanding. I can only now tell my story here and express my thoughts. I sincerely hope that more people can step forward to work together to stop the CCP persecution of Falun Gong practitioners who follow the principle of Truthfulness-Compassion-Forbearance."

Ten years ago, Pang Jin was a 15-year-old middle school student. Along with her practitioner mother, she participated in the "April 25th" appeal. After that, she once imagined that they could freely practice again.

However, what the future actually had in store for the teenage Pang Jin was far different: Almost every day, police and staff from the residential committee would come to her home to harass her mother and continually threaten Pang Jin, telling her that if her mother did not give up cultivation, she would not be able to see her mother. As of now, her mother has been illegally held in the Qingzhou Detention Center in Weifang City for nine months, and her family has been denied visits. To different extents, their relatives and friends, from the elderly to the young, have been intimidated and have had funds extorted from them. The money lost to extortion amounts to more than 200,000 yuan. They have been threatened and terrorized almost every day over the past ten years.

Pang Jin is currently a graduate student at Missouri State University. She said, "I'm now in a free country physically, but my heart is still linked to my hometown, worrying about my mother who is suffering persecution. There are more kind mothers and many more Falun Gong practitioners who are being incarcerated and subjected to brutal torture. Today, as someone who has experienced the persecution since the CCP launched it in 1999, I stand here to appeal: Please help us rescue our loved ones!"

Huang Kui: The biggest reason for the Chinese people to quit the CCP and its affiliated organizations 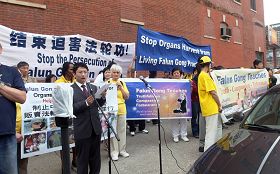 Mr. Huang Kui, a graduate student at Ohio State University, said, "I personally experienced the 'April 25th' appeal, and I'm also a direct victim and survivor of the CCP's brutal persecution of Falun Gong since the 'April 25th' appeal." For five years, Mr. Huang was imprisoned in Zhuhai Forced Labor Camp in Guangdong Province, where he was inhumanely tortured. Telling about his experience during that period of time, he said, "Most of the time, I don't want to recall those nightmare-like five years, but I know I must speak out."

Since the publication of the Nine Commentaries on the Communist Party in 2004, the CCP has escalated the persecution. Mr. Huang was deprived of sleep for 30 days on end, and his spirit was almost broken. The guards often yelled, "For you Falun Gong (practitioners), no matter how we treat you, it is legal. You have no way out."

He concluded by saying, "The inhumane and horrific persecution of more than a hundred million Falun Gong practitioners that has persisted for nearly ten years is the biggest crime that the CCP has ever committed and also the most important reason that it is doomed to collapse. This is also the biggest reason for Chinese people to quit the CCP and its affiliated organizations."

Ten years of ups and downs, the spirit of "April 25th" prevails forever

At the end of the rally, the practitioners marched in downtown Chicago, telling more people about the "April 25th" peaceful appeal in Beijing ten years ago. They let the public know that practitioners inside and outside China have been persevering in clarifying the facts and resisting the persecution in a peaceful and rational manner ever since. Passersby took flyers, and some kept applauding to show their encouragement.

It is known that more than three thousand Falun Gong practitioners have died as a result of the ten-year persecution. Falun Gong practitioners still stand firmly and uprightly, whether in the cold of winter or the heat of summer, unremittingly clarifying the facts, exposing the CCP's true nature, and resisting the persecution in a peaceful and rational manner. In the past ten years, Truthfulness-Compassion-Forbearance has been spread to over 80 countries, and the CCP will definitely collapse due to its persecution of the Buddha Fa.